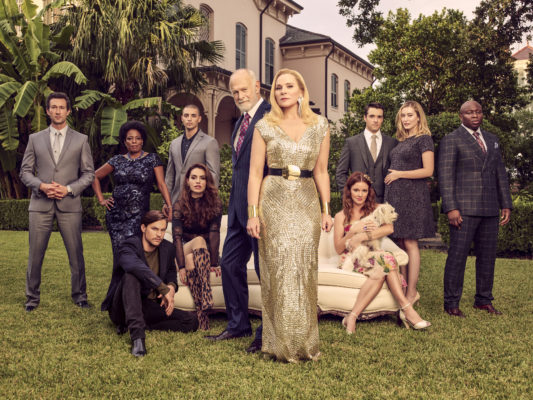 The Monreaux clan is a mega-rich Southern family that’s famous for creating a wildly successful Christian television network. On the cusp of launching a digital retail arm of the company, the family’s patriarch, Eugene (McRaney), dies in a plane crash. His wife, Margaret (Cattrall), is left to take charge of the family business and is seen as a bigger-than-life leader to the religious and Southern communities.

Not surprisingly, Eugene’s apparent death greatly impacts the Monreaux children. Ambitious son Eric (Cott) is married to prim and snooty Becky (Macklin), who assumes her husband will now run the show. Meanwhile, daughter Rose (Dollar) is a budding fashion designer, who constantly struggles to evade the vast shadow cast by her mother. The devastated family is stunned to learn that Eugene also fathered three illegitimate children — all of whom are written into his will.

Margaret must use her business savvy and Southern charm to control her newly legitimized heirs, whose very existence threatens the Monreaux family name and fortune. Ginger (Kreiling) is the tough-as-nails daughter of a Vegas cocktail waitress, whose life was virtually destroyed by Eugene’s rejection. Antonio (Aguilar) is a single dad and boxer from Queens.  Jason (Young) is the final offspring and he’s not who he seems to be.

Thankfully for Margaret, she has her rock in lifelong confidant and friend, family lawyer Franklin Lee (Harris). One of the threats to the Monreaux empire is the beloved, popular, influential, and ambitious minister at the Sunshine Network, Reverend Paul Thomas (Lazar), who doesn’t think Margaret is capable of running the network, a newly announced retail venture, and her TV show simultaneously.

With plenty of plot twists and turns — mixed in with lies, deceit, and shade from every direction — this is a world in which everyone has an ulterior motive – and no one is going down without a fight.

Series Finale:
Episode #10 — 1 Corinthians 3:13
The Monreaux family finds out an explosive secret that threatens to tear them apart. Meanwhile, with Mark and Rose ready to take a serious next step in their relationship, Margaret feels compelled to intervene and protect Rose.
First aired: November 30, 2020.

What do you think? Do you like the Filthy Rich TV show? Do you think it should have been cancelled or renewed for a second season?

Really wish they would reconsider and bring this show back on

Fox cancels Filthy Rich and Next.

This is beyond sad , this was one of the most creative shows I’ve seen in a decade by your station. This makes absolutely no sense …. I’m beyond eager for a season two I have so many theories on what’s going to happen …. I also BOUGHT CABLE for this show I’m 28 and have ONLY used WiFi since I was 20 but after seeing the first episode I was hooked , thanks a lot fox, you suck.

I love the first episode and I hope that the show will renewal for the second season.