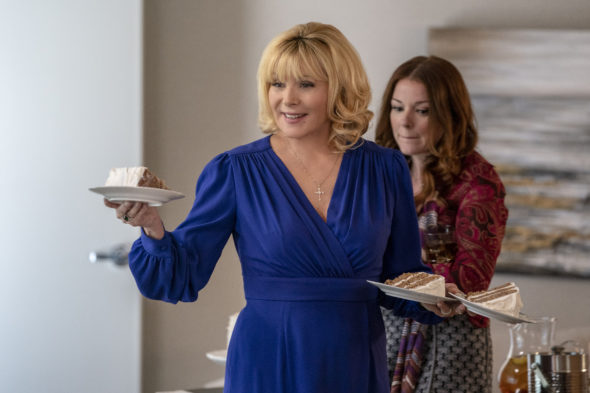 FOX has revealed premiere dates for two more of its Fall 2020 shows. Original TV show Filthy Rich and LA’s Finest, which first aired on Spectrum Originals, will both debut on Monday, September 21st.

Here’s more information, as well as a couple of trailers, from FOX:

FILTHY RICH is a southern Gothic family soap in which wealth, power and religion collide – with outrageously soapy results. When the patriarch (Emmy Award winner Gerald McRaney, “This Is Us,” “24: Legacy”) of a mega-rich Southern family, famed for creating a wildly successful Christian television network, dies in a plane crash, his wife (five-time Emmy Award nominee and Screen Actors Guild and Golden Globe winner Kim Cattrall, “Sex and the City”) and family are stunned to learn that he fathered three illegitimate children, all of whom are written into his will, threatening their family name and fortune. With monumental twists and turns, FILTHY RICH presents a world in which everyone has an ulterior motive – and no one is going down without a fight. From writer/director Tate Taylor (“Ma,” “The Help,” “The Girl on the Train”), the series also stars Melia Kreiling (“Tyrant”), Aubrey Dollar (“Battle Creek”), Corey Cott (“The Good Fight”), Benjamin Levy Aguilar (“Straight Outta Compton”), Mark L. Young (“We’re The Millers”) and Olivia Macklin (“LA to Vegas”), with Emmy Award nominee Steve Harris (“The Practice”) and Aaron Lazar (“Quantico,” “The Strain”). FILTHY RICH is produced by 20th Century Fox Television, Imagine Television and FOX Entertainment. Tate Taylor created the series, and wrote and directed the pilot. The series is executive-produced by Taylor, Brian Grazer, Francie Calfo, John Norris and Abe Sylvia. Sylvia serves as showrunner, and Kim Cattrall is a producer on the series.

From the universe of the Jerry Bruckheimer “Bad Boys” movie franchise and Sony Pictures Television, the action-drama series L.A.’S FINEST follows Syd Burnett (Gabrielle Union), last seen in Miami taking down a drug cartel, who has seemingly left her complicated past behind to become an LAPD detective. Paired with a new partner, Nancy McKenna (Jessica Alba), a working mom with an equally complex history, Syd is forced to confront how her unapologetic lifestyle may be masking a greater personal secret. Taking on the most dangerous criminals in Los Angeles while skirting the rules, and speed limits, Syd and Nancy become a force to be reckoned with – on the streets, and in each other’s lives. The series also stars Zack Gilford, Duane Martin, Ryan McPartlin, Sophie Reynolds and Ernie Hudson. L.A.’S FINEST is produced by Jerry Bruckheimer Television, and 2.0 Entertainment in association with Sony Pictures Television. Gabrielle Union and Jessica Alba executive produce alongside Jerry Bruckheimer, Jonathan Littman, KristieAnne Reed, Brandon Margolis, Brandon Sonnier, Pam Veasey, Doug Belgrad, Jeff Gaspin, Jeff Morrone and Anton Cropper, who also directed the pilot.

What do you think? Do you plan to watch Filthy Rich or LA’s Finest when they launch on FOX? Have you already seen the LA’s Finest series?

filthy rich sounds boring, gee i want to see problems of the rich, tying to keep their money from new family embers after the death of the father….no thanks

and l.a.’s finest, seems like little more than a female miami vice/ lethal weapon / bad boys, the preview seems lame, im betting it will mainly focus on the “personal lives” of the main characters, and turn into more of a soap opera then a cop show

Yes, I plan on watching Filthy Rich although it was advertised as a Fall show last fall and FOX never did show it. And yes I have already seen both seasons of LA’s Finest and I enjoyed them.