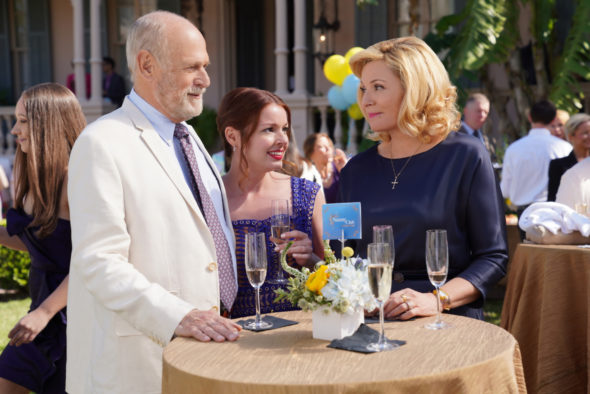 Which member of the Monreaux family will come out on top? Has the Filthy Rich TV show been cancelled or renewed for a second season on FOX? The television vulture is watching all the latest cancellation and renewal news, so this page is the place to track the status of Filthy Rich, season two. Bookmark it, or subscribe for the latest updates. Remember, the television vulture is watching your shows. Are you?

Airing on the FOX television network, the Filthy Rich TV show stars Kim Cattrall, Corey Cott, Olivia Macklin, Aubrey Dollar, Melia Kreiling, Benjamin Levy Aguilar, Mark L. Young, Steve Harris, Aaron Lazar, and Gerald McRaney. The Monreaux clan is a mega-rich Southern family that’s famous for creating a wildly successful Christian television network. On the cusp of launching a digital retail arm of the company, patriarch Eugene (McRaney) dies in a plane crash. His wife, Margaret (Cattrall), is left to take charge of the family business and is seen as a bigger-than-life leader to the religious and Southern communities. Eugene’s apparent death greatly impacts Margaret and the two adult Monreaux children but the whole clan’s lives are thrown into turmoil when it’s revealed that Eugene has named three illegitimate kids in his will. With plenty of plot twists and turns — mixed in with lies, deceit, and shade from every direction — this is a world in which everyone has an ulterior motive – and no one is going down without a fight.

The first season of Filthy Rich averages a 0.32 rating in the 18-49 demographic and 1.58 million viewers. Find out how Filthy Rich stacks up against other FOX TV shows.

Will FOX cancel or renew Filthy Rich for season two? The network has had a hard time establishing new drama series so, I have no doubt that FOX executives will give this show every chance to succeed. I’ll update this page with breaking developments. Subscribe for free alerts on Filthy Rich cancellation or renewal news.

What do you think? Were you hoping that the Filthy Rich TV show would be renewed for a second season? Are you sorry that FOX cancelled this TV series, instead?

Nooooooooo bring it back FOX!! Save my showwwwwww!

This show Filthy Rich should not be canceled, it is full of drama and many surprises for all the characters to make a great story line
. Please bring it back FOX!!!!!!

Ugg . Whoever canceled the show

Bring backFilthy Rich and dump every 911 /cop/doctor show you have. Please. Seth McFarland and Matt Groening can’t carry your sorry asses forever. And FOX, you lost the Super bowl. Wtf. Terry, Howie, Jimmie, and everyone else Im not mentioning, along with the camera guys, fox sports is the best package out there. Aside from James Brown, the CBS guys are hacks comparitively speaking of course…and then you dont bring back Filthy Rich?
I pretty much hate yall now with your 911 and you Fox News crap

So disappointed Filthy Rich was cancelled. Was a great show with a great cast. The whole plot was so unique and so many future scenarios to be written. Hope some other channel picks it up

I just discovered this show. Love it.

what the fu@k;
NO MORE filthy rich

Hate that you cancelled Filthy Rich. I was looking forward to more if it

I’m so upset that Filthy Rich was not picked up for a second season! Please Change your mind Fox Executives or Let Netflix pick up the show! We need to know what the next chapter for the family is.

noooooooooooo…… Fox, pease don’t cancel Filthy Rich… Pleeeeeeease don’t.
Me and my boyfriend watch it together… It’s not easy to find a series that you both can agree on…. Plus, it’s a dam good show! So please give us Season 2.

They shouldn’t of cancelled it!! I love the show

Awww , shows like this are FUN ! Pls bring back !!

Was really hoping this show would come back as it breaks up the rotation of cop and medical shows. Like this was a good night time soap opera. Someone pick this up!

I love the show filthy rich

Please bring Filthy Rich back. Love the diversion and drama from what is going on in this world today.