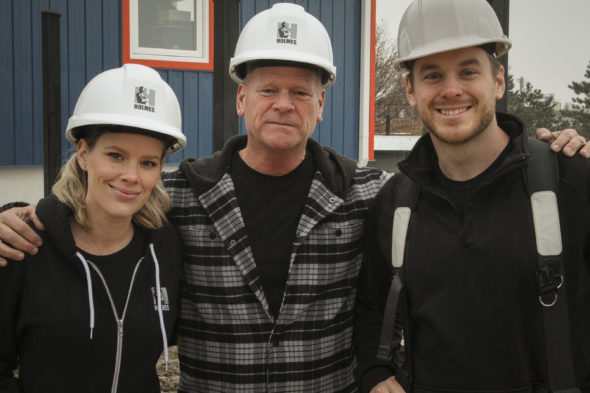 Will Mike and his kids be back? Has the Holmes Family Effect TV show been cancelled or renewed for a second season on FOX? The television vulture is watching all the latest cancellation and renewal news, so this page is the place to track the status of Holmes Family Effect, season two. Bookmark it, or subscribe for the latest updates. Remember, the television vulture is watching your shows. Are you?

Originating in Canada and airing on the FOX television network, the Holmes Family Effect TV show stars Mike Holmes, Sherry Holmes, Mike Holmes Jr., Frank Meleca, Russell Peters, Erich Saide, and Riley Stevenson. The feel-good series follows professional contractor and TV host Mike Holmes, his daughter Sherry, and his son Michael, as they help beloved community institutions, the people who work there and those who benefit from them. Inspired by local residents and community members who are making a difference in the lives of those around them, each episode follows the Holmes family as they surprise these deserving people by transforming their spaces. From a neglected school building to a rundown youth center, the Holmes family helps these hometown heroes in their quest to make a difference.

Will FOX cancel or renew Holmes Family Effect for season two? The network licenses this Canadian series so it likely doesn’t cost FOX much to air it. That being said, the word is that, once the pandemic is over, the network will be leaning away from licensing pre-existing programming. I don’t see this show being renewed on FOX. I’ll update this page with breaking developments. Subscribe for free alerts on Holmes Family Effect cancellation or renewal news.

What do you think? Do you hope that the Holmes Family Effect TV show will be renewed for a second season? How would you feel if FOX cancelled this TV series, instead?

We LOVE THIS SHOW AND HOPE IT CONTINUES!

Just saw it and loved it. Very inspiring. They need to promote it better

I just found out that the show was on FOX.
It is the best home re-do show. Why doesn’t FOX let people know when it airs????? Please renew it for a season 2 & promote when it will air.