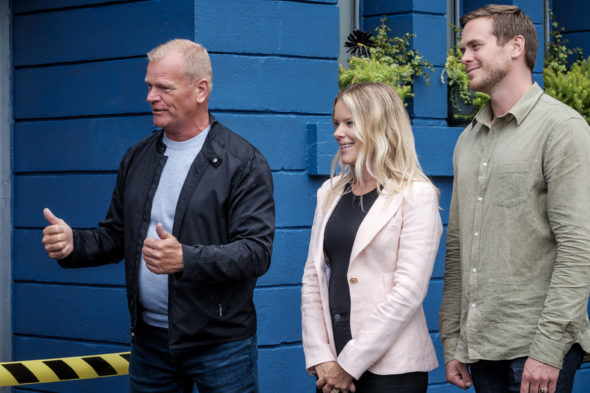 A FOX reality home improvement series, the Holmes Family Effect TV show stars Mike Holmes, Sherry Holmes, Mike Holmes Jr., Frank Meleca, Russell Peters, Erich Saide, and Riley Stevenson. The feel-good series follows professional contractor and TV host Mike Holmes, his daughter Sherry, and his son Michael, as they help beloved community institutions, the people who work there and those who benefit from them. Inspired by local residents and community members who are making a difference in the lives of those around them, each episode follows the Holmes family as they surprise these deserving people by transforming their spaces. From a neglected school building to a rundown youth center, the Holmes family helps these hometown heroes in their quest to make a difference.

Mike Holmes is wonderful. This is a show that shows us all an example of how we should treat others. This is a high quality show, just like Mike’s high quality renovations. This show is for all to see and be encouraged by. I loooove this show and look forward to more. Blessings to the Holmes family!

I have learned so much from viewing Mike Holmes shows. We are facing a major remodel and I have gained a lot of insight. A home and it’s updates and maintenance is, usually, the most expensive investment that one makes. The knowledge that Mike Holmes shares is masterful. Thank you Mike