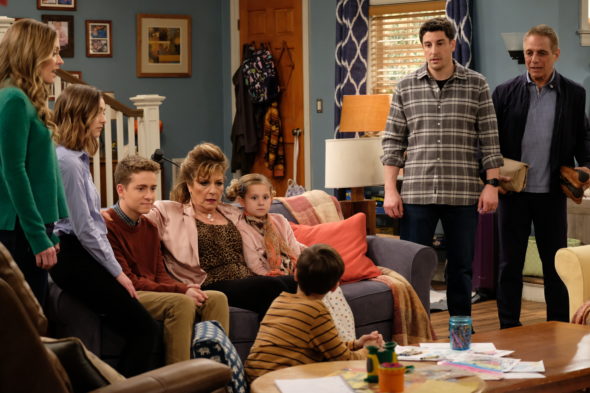 Can Mike and Kay get the upper hand in the first season of the Outmatched TV show on FOX? As we all know, the Nielsen ratings typically play a big role in determining whether a TV show like Outmatched is cancelled or renewed for season two. Unfortunately, most of us do not live in Nielsen households. Because many viewers feel frustration when their viewing habits and opinions aren’t considered, we invite you to rate all of the first season episodes of Outmatched here. *Status update below.

A FOX multi-camera family comedy, the Outmatched TV show stars Jason Biggs, Maggie Lawson, Connor Kalopsis, Ashley Boettcher, Jack Stanton, Oakley Bull, Tisha Campbell, and Finesse Mitchell. The series revolves around a blue-collar couple as they try to raise their four kids in Atlantic City. Parents Kay (Lawson) and Mike (Biggs) barely made it through high school and now, they find themselves parenting four kids, three of whom are certified geniuses. Eldest son Brian (Kalopsis) is a condescending and pretentious 16-year-old math whiz. Nicole (Boettcher), is a 15-year-old deceptive and fiercely competitive language prodigy. Meanwhile, 10-year-old Marc (Stanton) is a music savant. The only child who doesn’t drive her parents crazy is eight-year-old Leila (Bull). Mike and Kay’s childhood friends are Rita (Campbell) and Irwin (Mitchell) and they provide a sounding board for the couple’s daily parenting struggles.

What do you think? Which season one episodes of the Outmatched TV series do you rate as wonderful, terrible, or somewhere between? Do you think that Outmatched should be cancelled or renewed for a second season on FOX? Don’t forget to vote, and share your thoughts, below.

We love the series Outmatched and hope it is renewed!

Please bring Outmatched back. It’s such a laugh out loud pleasure to watch, I look forward to it every week. It is so hilarious! The cast is fabulous please don’t cancel it.