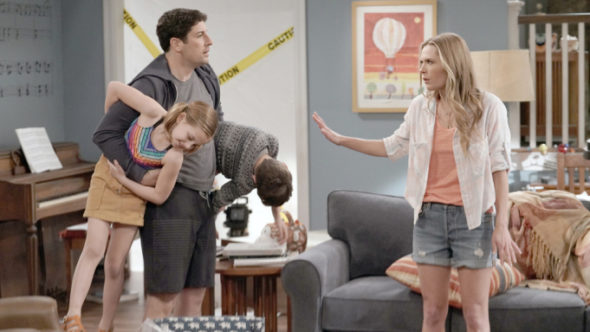 Looks like Outmatched is out. FOX has revealed that the TV show has been cancelled after only one season.

Over the course of its first season, Outmatched only managed an average rating of 0.56 in the 18-49 demo and 2.38 million viewers. That makes Outmatched one of FOX‘s lowest-rated new series for the 2019-20 season.

Fellow Thursday night sitcom Last Man Standing, which had much better ratings, has been renewed for a ninth season. The other resident of the night, freshman drama Deputy, was cancelled in April.

What do you think? Have you seen Outmatched? Would you have watched a second season on FOX?

I can’t believe how bad all the reviews are for this show! I absolutely loved it! I’ve even shared jokes and clips from the show with my family. I’m so upset it was cancelled, I was hooked!

I am so disappointed. I enjoyed Outmatched, and was looking forward to a second season!
Fox truly sucks…they keep asinine shows like “The Simpsons”, and cancel shows like “Outmatched”, “The Cool Kids”…..What’s next? “Call Me Kat”????
I am so upset with Fox!!!!!!

Better writing would have saved this show – had a lot of potential!

Bad move Fix this is a good show!

I loved it and am so sad it was canceled. I don’t know why the cancel smart shows and keep ones that are gross and immature.

I really wanted a second season. It leaves you on a cliff hanger, which isn’t even the worst part. This show is hilarious, wholesome, and unlike any other tv show.

I really enjoyed this show. It wasn’t a traditional tv family that made it interesting. Fox didn’t give this snow much of a chance. I will miss this fun loving show

It was an entertaining show. A relaxing way to spend a half hour once a week.

Why do networks cancel a good series it was a show you didn’t have to fellow every week it took no brain power at all to watch and after a very long day all I wanted is to relax and laugh so I can get up tomorrow @ 0300 am and yell and scream at a battalion of privates again so now I will have to make Mrs. Smith baby boy pay for Fox stupieity for cancelling Outmatched FOX DON’T MAKE MY LIST CSM R E Kelly U.S. Army

I was looking forward to where the plot and character development went,

Honestly this show didn’t look like it had a chance from the very beginning. Seemed very bland.