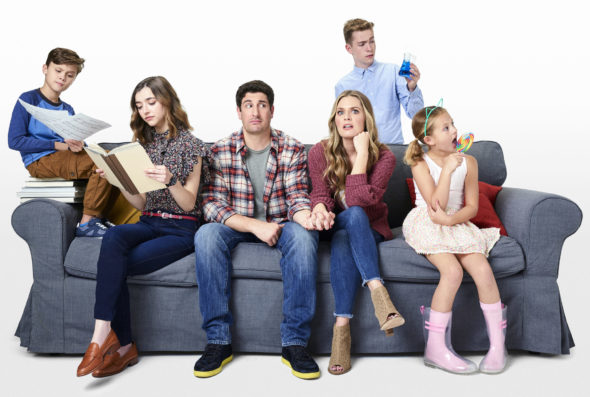 TV show description:
A multi-camera family comedy, the Outmatched TV show revolves around a blue-collar couple as they try to raise their four unique kids in Atlantic City.

Kay (Lawson) is a caustic, take-no-prisoners casino pit boss while her husband, Mike (Biggs), is a handyman and uncultivated guy’s guy. They barely made it through high school and now, they find themselves parenting four kids, three of whom are certified geniuses.

Eldest son Brian (Kalopsis) is a condescending and pretentious 16-year-old math whiz. He thinks he already knows more about the world than Mike and Kay ever will, even though he’s never actually been out of New Jersey.

Brian’s 15-year-old sister, Nicole (Boettcher), is a deceptive and fiercely competitive language prodigy who can manipulate her parents into getting anything she wants.

The youngest of the family is Marc (Stanton), a 10-year-old music savant. Introverted and idiosyncratic, he just wants everyone to leave him alone so that he can become the next Beethoven in peace.

The only child who doesn’t drive her parents crazy is eight-year-old Leila (Bull). She’s definitely not a genius and is actually the only kid Mike and Kay can even remotely understand.

The couple’s childhood friends are Rita (Campbell) and Irwin (Mitchell) and they provide a sounding board for Mike and Kay’s daily parenting struggles.

Series Finale:
Episode #10 — Royal Rumble
When Mike and Kay get caught in a lie about Leila’s birthdate, they offer to throw her a party with a theme of her choice, but have trouble keeping their ideas to themselves. Meanwhile, Brian, Nicole and Marc try to come to terms with the news that Rita and Irwin would be their guardians should something happen to Mike and Kay.
First aired: March 20, 2020.

What do you think? Do you like the Outmatched TV show? Do you think it should have been cancelled instead of renewed for a second season?

I really like the show the parents always had me laughing and i was curious to see what kind of challe nges the kid geniuses faced next really hope the show is brought back. I definitely want to see more.

I just love it ingenuity…. gonna miss it