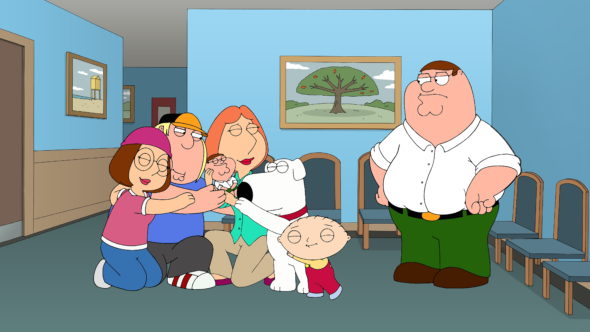 The Griffins aren’t going away anytime soon. FOX just announced Family Guy has been officially renewed for the 2020-21 season.

Work has been underway for a while on the season 18 episodes. In February 2019, FOX ordered production cycle KACX (FG-18) which will take Family Guy through its 18th season and possibly beyond (some episodes from previous production cycle JACX have yet to air). According to titles registered with the US Copyright Office, some season 18 episodes will include “Boys & Squirrels”, “Cutawayland”, “La Famiglia Guy”, “Meg’s Wedding”, “Peterminator”, “The First No L”, “Wild Wild West”, and “The Marrying Kind”.

What do you think? Are you a fan of Family Guy? Will you watch the new season on FOX?

SEASON 19 STARTS HERE IN EDINBURGH, SCOTLAND TOMORROW, MONDAY 26 TH OCTOBER 2020 AND I WILL BE TUNING IN.

Yes I will for sure watch the 19th season of Family Guy. I am a fan and cannot wait to see some new episodes.

I still think what I thought before: Family Needs to be laid to rest. Unless it shows massive improvement in quality and ratings, what’s the point?

Family Guy is absolutely genius. I love it!

Family Guy is THE BEST!!