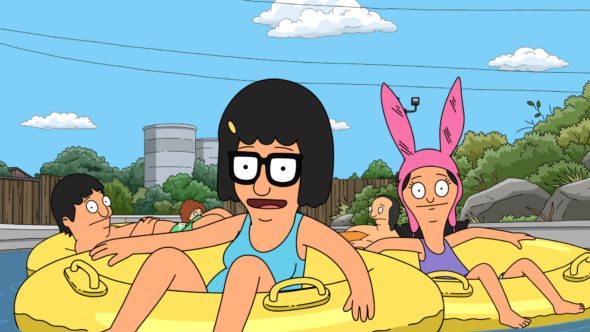 Fire up the grill! FOX has announced they’ve officially renewed Bob’s Burgers for an 11th season.

The 10th season of Bob’s Burgers is averaging a 0.74 rating in the 18-49 demographic and 1.87 million viewers. Compared to season nine, that’s down by 29% and 24%, respectively. Still, despite the dip, Bob’s Burgers, remains a middle-of-the-road performer for FOX during the 2019-20 season.

Production on season 11 has been underway for a while. FOX ordered production cycle 10AASA (BOB-10) back in February 2019. (Season 10 episodes have all had 9ASA production codes.) It’s unclear how many episodes are included in the 10AASA order but it is known that there will be enough episodes to take the show through at least season 11.

Thanks to the Bento Box Entertainment Twitter account, we know some of the episode titles will be “Bob Belcher and the Terrible, Horrible, No Good, Very Bad Kids”, “Mommy Boy”, “The Terminalator II: Terminals of Endearment”, “Diarrhea of a Poopy Kid”, “Yachty or Nice”, “Die Card, or Card Trying”, “An Incon-Wheelie-ent Truth”, and “Mr. Lonely Farts”.

What do you think? Are you a fan of Bob’s Burgers? Will you watch season 11 on FOX?

Archer did it first and is the superior show.

Super excited & grateful about this. THANK YOU FOX & LOREN

I am sooo happy about Bob’s Burgers being renewed for season 11…I watch it EVERY DAY on reruns, and when the opening credits come on I say to myself “I love you bob!!” It just gets me thru this rough patch that we as a world are going thru! Thank you BELCHERS!!!!

Easily my favorite show when I just want to smile, laugh and escape for 30 minutes – which is pretty frequent after listening to the news lately! So happy to hear there is another season

I am so happy about this.