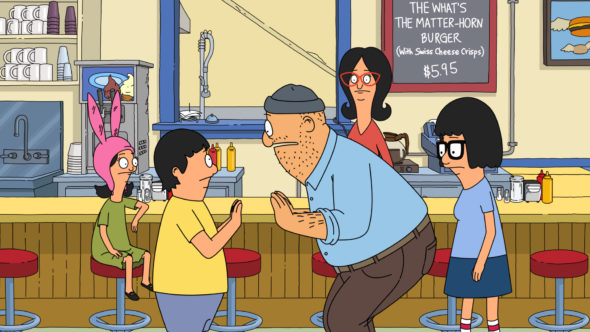 Is it “rare” for a show like this to be “well-done”? Has the Bob’s Burgers TV show been cancelled or renewed for a 12th season on FOX? The television vulture is watching all the latest cancellation and renewal news, so this page is the place to track the status of Bob’s Burgers, season 12. Bookmark it, or subscribe for the latest updates. Remember, the television vulture is watching your shows. Are you?

Airing on the FOX television network, Bob’s Burgers stars the voices of actors H. Jon Benjamin, Dan Mintz, Eugene Mirman, John Roberts, Kristen Schaal, and Larry Murphy. Bob Belcher (Benjamin) is a family man and a third-generation restaurateur who lives on Ocean Avenue in a small seaside town. He operates the Bob’s Burgers restaurant with his fun-loving and happy-go-lucky wife, Linda (Roberts), and their three kids. Tina (Mintz) is their socially awkward and insecure eldest daughter. Middle child Gene (Mirman) is the family’s whimsical, good-natured, and a bit goofy, son. Mischievous and a bit of a schemer, Louise (Schaal) is the youngest child and daughter. While Bob has big ideas about burgers, his diner’s location is lacking and the rest of the clan falls a little short when it comes to service.

There’s no reason to worry about Bob’s Burgers being cancelled for a while. FOX has renewed the series for season 12, as well as season 13. I’ll update this page with breaking developments. Subscribe for free alerts on Bob’s Burgers cancellation or renewal news.

What do you think? Are you glad that the Bob’s Burgers TV show has been renewed for a 12th season? How would you feel if FOX had cancelled this TV series, instead?

My husband and I love Bob’s we would hate it if Fox cancelled it we stayed up till 11 to watch it on the CW and then again at 3 a.m. we would wake back up to watch it again for a long time now it’s not on so we’re happy that it’s on Fox

My only request and wish for the 12th season is that there be much less
Jimmy Jr.& Tina moments and much more Rudy&Louise moments; like hopefully more kissing scenes if that’s not too inappropriate to ask for, or at the very least focus on Gene having some romantic interactions with some girl his age.

But other then that the show is doing just super.