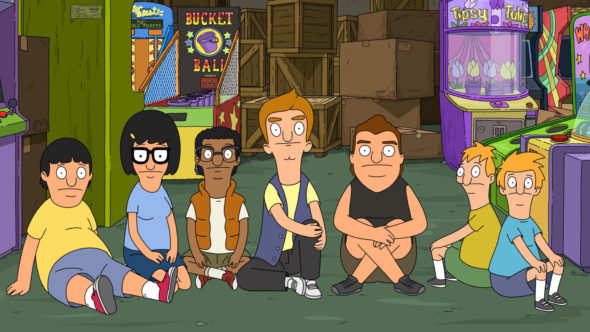 Does Bob Belcher still run the greasiest greasy spoon in town? Is the Bob’s Burgers TV show cancelled or renewed for a 10th season on FOX? Telly the television vulture is watching for the latest cancellation and renewal news, so this page is a dedicated place to track the status of Bob’s Burgers, season 10. Bookmark it or subscribe for the latest updates. Remember, the television vulture is watching your shows. Are you?

The ninth season of Bob’s Burgers averaged a 1.04 rating in the 18-49 demographic and 2.45 million viewers. Compared to season eight, that’s up by 3% and 10%, respectively. Learn how Bob’s Burgers stacks up against the other FOX TV shows.

Will FOX cancel or renew Bob’s Burgers for season 10? I don’t foresee this series being cancelled this time around. For now, I’ll keep an eye on the Nielsens and update this page with breaking developments. subscribe for free updates on any Bob’s Burgers cancellation or renewal news.

What do you think? Should the Bob’s Burgers TV show have been cancelled or renewed for a tenth season on FOX? When do you think this animated TV series should end?

You renew a show like Bob’s burgers yet you cancel DEPUTY THIS MAKES NO SENSE AT ALL. What is going to happen to the Resident. I really hope you renewed this show for a few more seasons it is a great show also. Can you please let me know. Thank you.