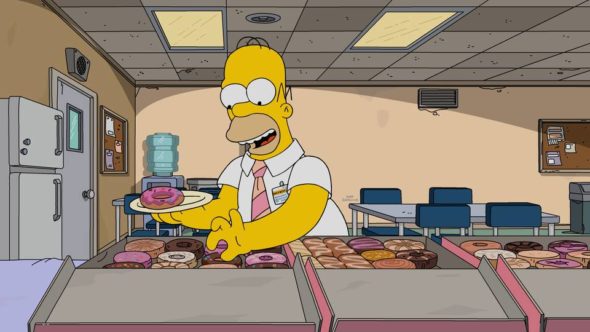 Is it time for Springfield, USA to close up shop? Has The Simpsons TV show been cancelled or renewed for a 31st season on FOX? The television vulture is watching for the latest cancellation and renewal news, so this page is the place to track the status of The Simpsons, season 31. Bookmark it, or subscribe for the latest updates. Remember, the television vulture is watching your shows. Are you?

The 30th season of The Simpsons on FOX averaged a 1.19 rating in the 18-49 demographic and 3.11 million viewers. Compared to season 29, that’s down by 16% in the demo and down by 10% in viewership. Find out how The Simpsons stacks up against the other FOX TV shows.

Will FOX cancel or renew The Simpsons for season 31? I highly doubt that it will be cancelled at this point. Despite being the oldest scripted series on TV, the ratings are still very good for a FOX show and the series also makes a lot of money for the studio in syndication. Still, I’ll keep an eye on the Nielsens and update this page with breaking developments. Subscribe for free The Simpsons cancellation and renewal alerts.

What do you think? Are you glad that The Simpsons TV show has been renewed through season 32? How would you feel if FOX had cancelled this TV series, instead?

I’ve watched the Simpson’s since 1995, and every few months catch up on all my missed episodes. Absolutely love the Halloween Treehouse ones, I’ve never missed one in… 25 years. GOT is the only other thing that kept me coming back after the 5 yr Mark.

ENJOYMENT FOR EVERYONE
Keep the Simpsons going. Be nice to have a never ending show.

Please end next season or this season final season end of it run let die out getting old school before I was born been on long time period.