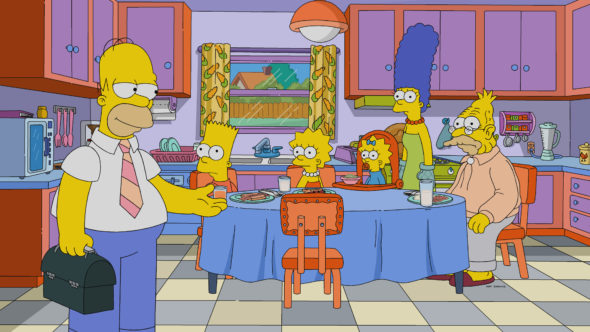 Will Lisa and Bart ever graduate? Has The Simpsons TV show been cancelled or renewed for a 33rd season on FOX? The television vulture is watching all the latest cancellation and renewal news, so this page is the place to track the status of The Simpsons, season 33. Bookmark it, or subscribe for the latest updates. Remember, the television vulture is watching your shows. Are you?

The 32nd season of The Simpsons averaged a 0.71 rating in the 18-49 demographic and 2.03 million viewers. Compared to season 31, that’s down by 25% in the demo and down by 21% in viewership. Find out how The Simpsons stacks up against other FOX TV shows.

Will FOX cancel or renew The Simpsons for season 33? When the series was renewed for seasons 31 and 32, the network picked up the series through episode 713. At the end of season 31, 684 installments had aired so that leaves 29 episodes left unaired. If FOX runs 22 installments for season 32 (though they could certainly air more because of the pandemic), that will leave seven episodes which can be included in the 33rd season. I’m confident the series will be renewed. I’ll update this page with breaking developments. Subscribe for free alerts on The Simpsons cancellation or renewal news.

What do you think? Are you glad that The Simpsons TV show has been renewed? Do you think it’s possible that this FOX series could have been cancelled, instead?

Keep them going with new episodes on Sundays like way back when at 8pm. Hate waiting over a month sometimes for a new episode to come out. The writers are getting lazy. I now watch them with my kids who are also adults now…43 years old and I’ve been watching the Simpsons since I was in 5th grade. Lol “Ugly Laugh” Comedy.

Let die and end old show should be final season.

I’d like to see another 30+ seasons. The simpsons has been around since a couple years before I was born. I’d like to see it stay around for life. Plus it’s cool how it oddly predicts things years in the future.

Need to be end

It’s more accurate to say seasons 1 to 8 were the best (though I felt the quality and tone started to slip in season 7 and 8, and especially by season 9). Season 10 and beyond are just plain trash.

I haven’t watched The Simpsons since season 22, and don’t plan to ever again, other than rewatching seasons 1 through 9.