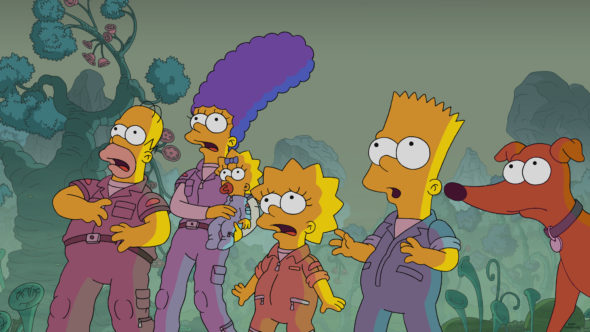 The Simpsons is currently airing season 31 on FOX, and some are wondering if the series is nearing its end. The concerns about the series ending at the conclusion of this current season raised to a fever pitch after the man that created the theme song said he thought it was ending this season.

Danny Elfman said the following about the FOX animated series to Joe:

“Well, from what I’ve heard, it is coming to an end. So, that argument will also come to an end. […] I don’t know for a fact, but I’ve heard that it will be in its last year.”

As soon as those comments started to make the rounds, the man in charge of The Simpsons, AJ Jean, went to his Twitter to squash the rumor.

.@TheSimpsons We are all thankful the following article is NOT TRUE: https://t.co/2Z0VqdfIEM

It looks like fans do not have to worry about The Simpsons just yet. Animation is set to live on FOX Sunday nights for a bit anyway. Bless the Harts was renewed for a second season soon after its premiere. The Simpsons is the anchor for that night of programming.

What do you think? Are you a fan of The Simpsons? How much longer do you want to see the series on the air?

Really one of the oldest series sitcom/tv history. Need to end cancelled awful not funny. Original season 1-10 was the best loved it.

I think he Simpsons has had a good run. However, I would not loose any sleep if it was cancelled.

Thank you agreed with me let die old show who care universal studio just theme park they have Orlando Florida only that left. Took a lot show love over the years but not this show awful comedy than was back then. Tired of it,

Simpsons was an important part of my childhood. It turned into hot garbage by the time I was in college and just continued down the path of pure crap. South Park is a superior bit of reasonable Libertarian politics and stands willing to call garbage in society by its true name, unapologetically.

This is a great show I dare you to create a better one that has longevity like The Simpsons.

This show has gone WAY past its prime.
Family Guy is funnier than this show ANY given day

This show should have ended around 2000. The last time it was funny.

I would love to see the Simpson’s go as long as possible! One of the funniest shows on TV . Sunday’s would never be the same without them.

I think this show should have ended years ago.