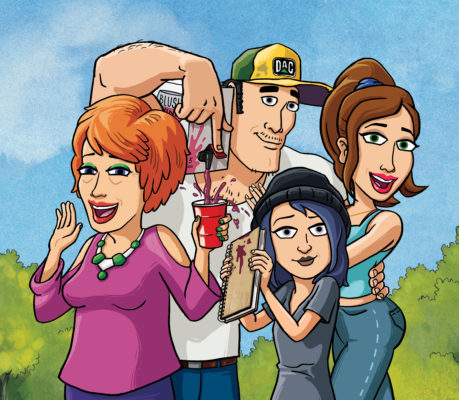 BLESS THE HARTS and © 2019 TCFFC ALL RIGHTS RESERVED. Credit: FOX.

TV show description:
An animated family sitcom, Bless the Harts is based on the early life of series creator Emily Spivey.

The Harts are a Southern family that is always broke and struggling to make ends meet. Though they haven’t achieved the American dream, the family feels rich in friends, family, and laughter. If only those could pay the bills.

Jenny Hart (Wiig) is a single mother who supports her family working as a waitress in the small town of Greenpoint, North Carolina. She’s often butts heads with (or schemes with) her lottery scratcher-obsessed mother, Betty (Rudolph), and her witty, creative daughter, Violet (Bell).

Jenny’s doting and eternally optimist boyfriend of 10 years is Wayne Edwards (Barinholtz), the love of her life and a surrogate father to her daughter, Violet. Wayne’s a charming dreamer who may never hit the big time, but he’s not going to give up the fight.

Jenny’s even got a bit of divine power in her corner. Jesus (Nanjiani) regularly appears to her while she waits tables at the neighborhood restaurant called The Last Supper.

In the end, the Harts may not have much, but they may just have everything they need.

What do you think? Do you like the Bless the Harts TV show on FOX? Do you think it should have been cancelled or renewed for a third season?

I really enjoy this show and I wish it could be renewed by Fox or picked up by someone else.

Watched the 1st show. Don’t know why, I really like it. Guess because I’m a redneck. I know my one and only would have loved it if he hadn’t passed away. Maybe that’s why I like, also. Who cares. Keep it on the air.

this show is terrible, not funny, bad characters, why was this even put on the air?

bring back king of the hill instead.

i totally agree it stinks needs ta be cancelled