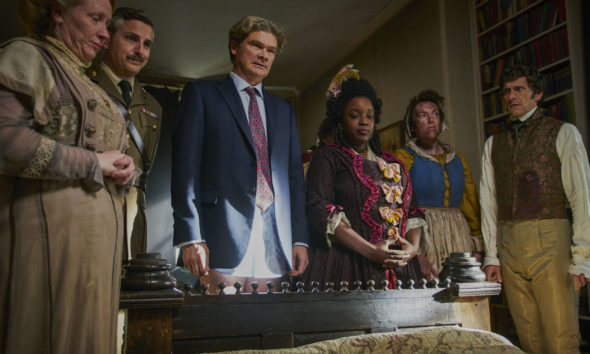 Rose McIver (iZombie) is returning to the small screen with a new series, titled Ghosts, headed to CBS. The actress will star in the single-camera comedy which follows a couple (McIver and Utkarsh Ambudkar) after they move into a haunted house they’ve inherited, per Variety.

Brandon Scott Jones, Richie Moriarty, Asher Grodman, Rebecca Wisocky, Sheila Carrasco, Danielle Pinnock, and Roman Zaragoza also star in the series, which is an adaptation of a BBC One series (above) of the same name.

Joe Port and Joe Wiseman are both executive producing and writing the new CBS series. It is not known how many episodes the first season of Ghosts will have. A premiere date was also not set, but it will arrive in the 2021- 2022 season.

What do you think? Are you going to check out the Ghosts TV series on CBS next season?

My daughter and I are excited for the show Ghosts.

My wife and I are looking forward to the New show ‘Ghosts’. The trailer looked pretty funny! Peace, Marc

Yes, I will check it out. If it humorous and a good story.

I’m a Brit so I know the original series. It was really funny with each ghost from a different era. I will watch to see if it’s as good. One request, please don’t use the British scripts. That didn’t work with season one of Threes Company.