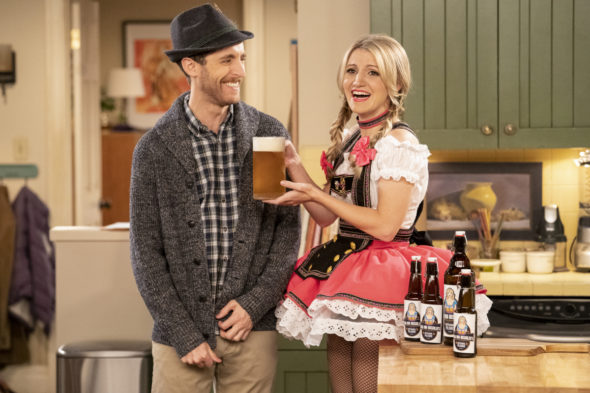 The cast and crew of B Positive have received an early Christmas present. CBS has given the freshman sitcom an order for five additional episodes, bringing B Positive’s first season tally to 18 episodes. Just five installments have aired thus far and the series returns from hiatus on January 7th.

CBS has given a full-season order to freshman comedy B POSITIVE for the 2020-2021 broadcast season.

B POSITIVE, from award-winning executive producer Chuck Lorre and creator Marco Pennette, stars Emmy Award nominee Thomas Middleditch and Tony Award winner Annaleigh Ashford in a humorous and life-affirming series about Drew (Middleditch), a therapist and newly divorced dad who, when he discovers he needs a new kidney, runs into Gina (Ashford), a rough-around-the-edges woman from his past who volunteers hers. Kether Donohue, Sara Rue, Izzy G. and Terrence Terrell also star. The series is inspired by Pennette’s personal experience as a transplant recipient.

B POSITIVE airs Thursdays (8:30-9:00 PM, ET/PT) on the CBS Television Network. The series is produced by Chuck Lorre Productions in association with Warner Bros. Television.

What do you think? Have you been enjoying the B Positive TV show on CBS? Are you glad that the network ordered additional episodes? Are you hoping that it will be renewed for a second season?

I worked in some sort of “retirement home” for 30 years and I love this show.
The relationship the staff and residents, residents and residents, higher ups and
staff, higher ups and residents is wonderful. It’s the way it used to be when
“retirement homes” were family run….and was not more for the money as it is now. Please don’t cancel this show. Hector, Linda, Jane,Ben all play their parts so realistically. Drew and the the girl (OWNER) are the comic relief.
Again I beg of you please do not cancel this show.

Hope B-positive gets cancelled it sucks, lady very annoying voice and not funny

I really love the show. I would be sad if CBS didn’t renew it.

Love This Show Please Do Not Cancel

I’m a COMEDY FANATIC!! Some of my favorites: Mike & Molly; The Big Bang theory; The Neighborhood; Bob lives Abishola, and many…many…many more!! And after watching BE POSITIVE, I record every episode and watch it other days if the week, because I LOVE IT!! The actors/actresses selected are spectacular!! The persons in charge of getting them couldn’t pick up a better group! And specially during these days when we need more laughs than sadness. CONGRATULATIONS!!
PLEASE, DON’T CANCEL IT!!!

to all the people bitching about b positive being ‘disgraceful’, this show’s based on a true story. but i guess you’d rather have shows like ncis which has been around for 17 years and their many spin-offs, or fbi and it’s spin-off and sealteam?

No I think the premise is disgraceful.

Great show. Both main characters do physical and verbal comedy well with perfect timing. Supporting cast a great match. Gets a strong yes vote from me.

Serious it’s just garbage. It’s just another version of this guys wreck what he thinks is funny. But only thing is that he just wants to make money! This is in poor taste. No reason to remove this garbage it was terrible from the beginning

I’m glad it got renewed! I think it’s really funny & the woman who is the kidney donor is so funny!!! Hey, if they keep a lot of AWFUL shows going for years why not this gem? We have more than our share of medical & hospital shows so I’m ready for a comedy. And I don’t mean non-funny stuff like the Neighborhood & others… some are just sooooo unfunny!

Oh that’s great, i wasn’t sure about this show at first, but it’s gets funnier every new episode. IT REALLY IS A HOOT.

Yes, it’s a hoot! Sure nice to laugh in this horrendous year and the two of them are great!

Oh goodness not! No more

since when is a full season order 18 episodes! it used to be 24 episodes pers season for a show

It could be a money thing. But hey, Parks and Recreation’s first season was like 6 episodes, I think.