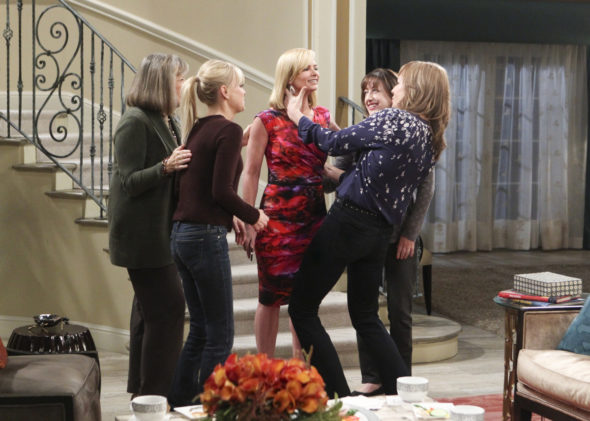 It’s not Mother’s Day yet, but CBS had renewed its Mom TV show for a sixth season. The dysfunctional family comedy was never in any real cancellation danger. It not only remains a strong Nielsen ratings performer for the Tiffany Network — its ratings even improved in season five, so the early renewal makes sense.

A CBS sitcom, Mom stars Anna Faris, Allison Janney, Jaime Pressly, Matt Jones, Sadie Calvano, Blake Garrett Rosenthal, Mimi Kennedy, Beth Hall, and William Fichtner. The series centers on Christy (Faris), a single mom in recovery who has moved back in with her own single mother, Bonnie (Janney), who’s also in recovery. Together, and with the help of AA, Christy and Bonnie spot one another along their sometimes rocky road.

Mom: A Look at the Ratings

The fifth season of Mom is averaging a 1.48 rating in the 18-49 demographic and 8.811 million viewers. Compared to season four, that’s up by 3.5% in the demo and up by 17% in viewership. Out of the 22 scripted CBS TV shows we’re tracking, Mom ranks third when sorted by demo performance and seventh in terms of total audience size.

For more, check out this CBS press release on the Mom season six renewal.

CBS announced today that it has renewed the critically acclaimed MOM for the 2018-2019 season. The comedy starring Anna Faris and Academy and Emmy Award winner Allison Janney, which recently celebrated its 100thepisode, is being picked up for a sixth season, joining other hit shows from CBS’ powerhouse Thursday night lineup, THE BIG BANG THEORY, YOUNG SHELDON and S.W.A.T., in being renewed for next year.

“MOM has been a lynchpin comedy for us over the last several years,” said Kelly Kahl, President, CBS Entertainment. “It’s a fearless series that tackles provocative social issues with laughter and grace, and a large, loyal audience has followed. With gifted talents like Anna and Allison leading a great ensemble cast, and a production team headed by Chuck Lorre, Eddie Gorodetsky, Nick Bakay and Gemma Baker, this series just keeps getting better.”

MOM is currently averaging over 11 million viewers and is the third most-watched comedy in broadcast television (behind only CBS’ THE BIG BANG THEORY and YOUNG SHELDON) and is a top 5 comedy among both adults 25-54 and adults 18-49.

What do you think? Did you expect CBS to cancel or renew its Mom TV series for season six? How much longer do you think it will run? Let us know, below.

Mom is my favorite show! I’m happy to hear it hasn’t been cancelled and I hope it will be renewed for future seasons. My husband was reluctant to watch but now he’s hooked also. I’m enjoying watching previous seasons late at night. That way I can catch up on the ones that I missed.

Love this show too, hope there will be many more seasons!

I faithfully watch this comedy every Thursday night and record all episodes so I can watch them when it’s not on tv. It is a hilarious comedy.

FOR ME IT IS THE BEST COMEDY…..JUST LOVE IT..HOPE THEY KEEP IT FOR YEARS TO COME

I absolutely love this show. It’s smartly written and deals with such diverse subjects in a real way. I’ve cried and I’ve laughed till I cried watching Mom. I hope they will continue for a long time.

I love this show!!!!! I even rewatch reruns and still love it!! I never want this show to be cancelled for a very long time!!!!!

There was no doubt in my mind that this show was a winner and never should be considered for cancelation. Then again, I have felt that way about quite a few that were dropped in the past. Very, very glad this time I was right.

Mom is spectacular because everybody can relate to it, Hope it’s on the air for a long time