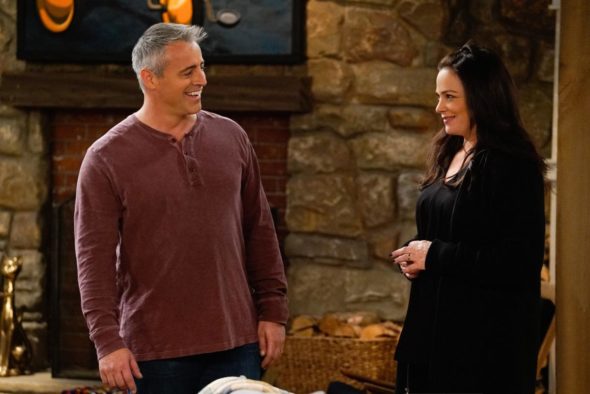 While this wasn’t originally in the plan, CBS has upped its second season order for its Man with a Plan TV show to a full season. Although the season two renewal was initially for a limited 13 episode run, after pulling freshman sitcom, Me, Myself & I from the schedule — leaving it effectively cancelled — the Tiffany Network moved up the premiere for Matt LeBlanc’s Man with a Plan, to fill the gap.

A CBS family comedy, Man with a Plan stars LeBlanc as a contractor named Adam. When his wife, Andi (Liza Snyder), returns to work, this old-school dad has to step up his home game with the kids and finds it harder than he thought possible. The cast also includes Kevin Nealon, Stacy Keach, Grace Kaufman, Matthew McCann, Hala Finley, and Matt Cook.

CBS has given full season orders to Monday night comedies MAN WITH A PLAN and SUPERIOR DONUTS.

After just two episodes have aired, the second season of Man with a Plan is averaging a 1.00 rating in the 18-49 demographic and 5.41 million viewers. Compared to season one, that’s down by 19% and down by 15%, respectively. Currently it ranks 15th in terms of its demo numbers and 19th in terms of total viewership, out of the 22 scripted CBS TV shows we’re tracking.

What do you think? Are you a fan of the Man with a Plan TV series? Do you think it deserved a full second season? Do you expect it to be cancelled or renewed for season three?

Use started watching this series on firestick….am addicted now. I hope it’s around for season 3….

Man with a plan, is the best show ever!! Please oh please finish the whole second season. Then make a season three!! Matt Leblanc is so sexy and funny and America needs more of him! Lol this show is great, it would be unfortunate if it was off the air. Its a great family show, that everyone can relate to. My name is Andrea Hile and I beg you to finish the show. Thank you

Give this comedy a chance to catch on. The writing is funnnnnnny and the acting is wonderful.

Love this show it is good to have a laugh hope it continues acting is great. The banter between the husband and wife just cracks me up.

This is one of the best shows on TV.

It certainly can bring a smile & is far superior to Kenvin Can Wait which has become another show of Leah harping on stupid Kevin. I say cancel that one & bring back Me, Myself & I. It was given up on too soon.

I really like Man w/Plan and hope it continues! So happy it’s back

Although I am very glad to see man with a plan come back for another season (so funny) I am sad to see me myself and I go when I was just starting to get to know the characters.