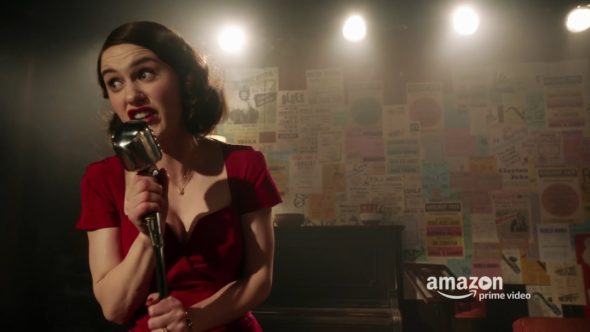 Amy Sherman-Palladino and Daniel Palladino, who are responsible for the cancelled Bunheads, as well as the long-running Gilmore Girls, are the talents behind The Marvelous Mrs. Maisel TV show. The first season, which drops in full to Amazon Prime on November 29th, centers on Midge Maisel (Rachel Brosnahan), an Upper West Side housewife and mother who tries her hand and standup comedy, after her marriage crumbles.

A dramedy which debuted in March of this year, The Marvelous Mrs. Maisel also stars Michael Zegen, Alex Borstein, Tony Shalhoub, and Marin Hinkle. Amazon has enough faith in the series (and the Palladinos), that it issued a two-season pickup. Later, it also signed the couple to an overall development deal. Although Sherman-Palladino jokes that she sees this new 1950s period series running 35 years, she also confirms she has at least two or three additional seasons planned.

Given how the serialized the show is and you actually put in the series descriptor, this show is going to show her from discovering her talent to Johnny Carson’s couch, how long do you see the show running?

Palladino: And when we say Johnny Carson‘s couch, we mean the couch on set. With everything going on right now, we have to be clear.

Sherman-Palladino: In this day and age, it can mean something else completely.

Palladino: It’s the one on his set that’s on camera. We’re not hiding the fact that this is going to be a journey of success. It’s the journey that we think is going to be interesting for the audience.

Do you have a number of seasons plotted out?

Sherman-Palladino: I think we know what our trajectory is for the first four to five seasons. And then I just want to see if I’m still breathing at that point. If I am, then we’ll continue or Dan and his new wife will continue!

There’s recently been a lot of executive changes at Amazon. Now that you have an overall deal, how concerned are you about going forward at the studio? How are you feeling about Amazon given those recent exits?

Sherman-Palladino: Our guys at Amazon are Marc Resteghini and Ken Lipman, and they’re still there. They’re good guys. Our people have been very constant.

Palladino: What’s kind of cool about how our brief time so far has been at Amazon is, at this point, we’re kind of like independent filmmakers or independent TV makers on our own. They know that the deal is: here’s what we’re going to try to do. Let us do it to the best of our ability, meaning like don’t throw a lot of different things at us. Take it or leave it as is, and let us do our thing and they were amazing on that with Maisel. We gave them what we promised…

Sherman-Palladino: …And they did what they promised.

Palladino: We’re still independent producers within the Amazon realm and we’re happy there because we need cameras, we need financing, we need an office, we need a home, and they’re happily providing all of that. It’s been good and we’re looking forward to a really great relationship with them.

What do you think? Have you watched The Marvelous Mrs. Maisel TV series pilot on Amazon Prime, yet? Do you plan to check out season one, when it drops, later this week?

Marvelous Mrs. Maisel is captivating, spontaneous and unique! My family of 7 watched the entire first season in 2 days! Looking forward to Miriam’s journey in the world of stand-up comedy!