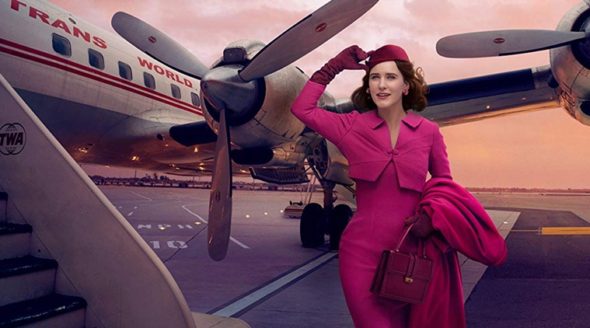 Will Midge’s career hit new heights? Has The Marvelous Mrs. Maisel TV show been cancelled or renewed for a fourth season on Amazon Prime? The television vulture is watching all the latest cancellation and renewal news, so this page is the place to track the status of The Marvelous Mrs. Maisel, season four. Bookmark it, or subscribe for the latest updates. Remember, the television vulture is watching your shows. Are you?

An Amazon Prime Video period dramedy, The Marvelous Mrs. Maisel stars Rachel Brosnahan, Michael Zegen, Alex Borstein, Tony Shalhoub, Marin Hinkle, Caroline Aaron, and Jane Lynch. The story centers on Miriam “Midge” Maisel (Brosnahan), a wife and homemaker on New York City’s Upper West Side, in the late 1950s and early ’60s. After her husband, Joel (Zegen), leaves her, Midge discovers a talent for standup comedy and pursues her new dream. In the third season, Midge and Susie (Borstein) discover that life on tour with singer Shy Baldwin (Leroy McClain) is glamorous but humbling, and they learn a lesson about show business they’ll never forget. Joel struggles to support Midge while pursuing his own dreams. Abe (Shalhoub) embraces a new mission while Rose (Hinkle) learns she has talents of her own.

Will Amazon cancel or renew The Marvelous Mrs. Maisel for season four? This is one of Amazon’s most notable series so I think the show will be renewed. When it is time to end the show, I expect that Amazon will give the writers advance notice so they can craft a proper final season. I’ll update this page with breaking developments. Subscribe for free alerts on The Marvelous Mrs. Maisel cancellation or renewal news.

12/13/19 update: The Marvelous Mrs. Maisel has been renewed for a fourth season on Amazon Prime.

What do you think? Are you glad that The Marvelous Mrs. Maisel TV show has been renewed for a fourth season? How would you feel if Amazon Prime had cancelled this TV series, instead?

Season 4 is a disappointment at the halfway mark. The cast is faultless, but the scripts have fallen in quality and the borderline offensive Jewyness grown more false, exaggerated and phony. As a Jewish person I am offended by the depths to which Season 4 has descended in its depiction of Jewish behavior. I know it’s a comedy, but a comedy that has severed any tie to reality is not a funny comedy. Particularly Abe, who apparently needs to be committed to a psychiatric facility, but almost everybody has been identified by their worst personality trait and little else. Every… Read more »

Season 1 & 2 were good. Season 3 was fantastic. If Midge and Susie were left at the airport without a Season 4 I would have been extremely disappointed in Amazon after cancelling Goliath.