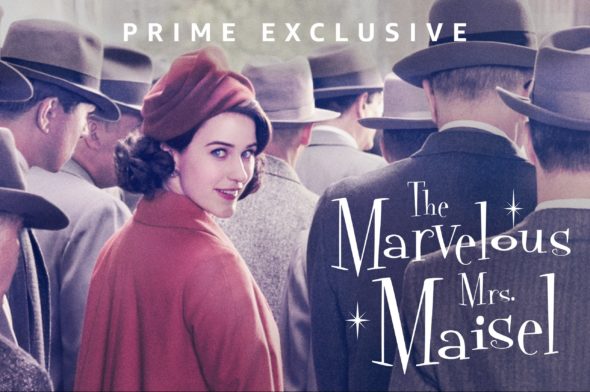 TV show description:
A historical comedy-drama from creator Amy Sherman-Palladino, The Marvelous Mrs. Maisel TV show centers on Miriam “Midge” Maisel. Her story kicks off in New York City in the late 1950s and early ’60s, with Mrs. Maisel as an Upper West Side housewife and mother of two children. Although Midge seems to be living in a picture perfect world of domesticity, cracks soon emerge.

Despite an obvious lack of talent, Midge’s businessman husband, Joel (Zegen), aspires to be a standup comedian and is not above stealing the acts of pros, like Bob Newhart. As a devoted wife, she accepts Joel’s explanations and always goes above and beyond to support his dreams. After all, her life is unfolding exactly as she had always planned.

One evening, following a particularly dreadful performance, Joel leaves her for another woman and upends Midge’s entire existence. After a tipsy, spontaneous turn at the mic, during which she bares her chest and is arrested on a morals charge, Midge meets Lenny Bruce (Luke Kirby) at the jail. Although he discourages her from a life in comedy, she views this as a challenge.

When she informs her parents about Joel’s defection, all her mother, Rose (Hinkle), can worry about is what their rabbi and friends will think. Meanwhile, although Midge’s father, Abe (Shalhoub), reveals he always thought Joel was weak, he insists she woo him back. It seems Abe just doesn’t believe his daughter can make it without a man.

Susie Myerson (Borstein), an employee at the Gaslight Cafe where Joel worked the stage, bails out Midge after her indecency charge. Wowed by Midge’s raw talent, she decides to help this young woman develop and fine-tune her act. After putting in some time in Greenwich Village nightclubs, Midge finally blazes a trail all the way to The Tonight Show Starring Johnny Carson.

All bets are off, as she forsakes her life of hosting elegant Yom Kippur dinners to pursue her new passion. With two little kids and a broken heart, can Midge really start all over? Stay tuned.

What do you think? Do you like The Marvelous Mrs. Maisel TV series? Should this TV show be ending or renewed for a sixth season on Amazon?

My absolute FAVOURITE show! It must be renewed!!

Terrific show. Destined to be a classic.

I am totally enthralled with this series! I was 18 in 1958, love the depictions of the era, clothing, and music. I love Midge and her total persona, enjoy her comedy skits and totally outrageous interactions with the others in the cast particularly Susie (she is marvelous also). Whoever did the casting should get an award!

There is a good story line but I really like the skit she does in each episode.