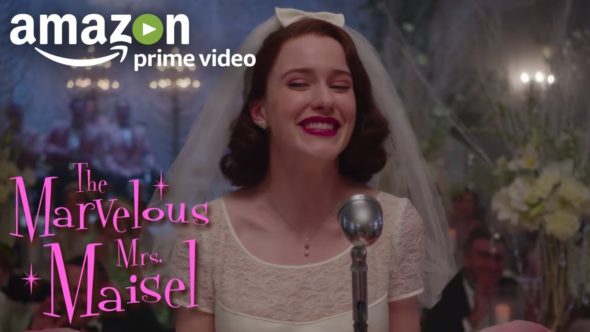 Does Miriam Maisel make you laugh and cry during first season of The Marvelous Mrs. Maisel TV show on Amazon? Usually, the Nielsen ratings play a big role in determining whether TV shows are cancelled or renewed. Amazon and other streaming services, however, collect their own data. If you’ve been watching this TV series, we’d love to know how you feel about the The Marvelous Mrs. Maisel season one episodes. We invite you to rate them, below.

A comedic Amazon period drama, The Marvelous Mrs. Maisel stars Rachel Brosnahan, Michael Zegen, Alex Borstein, Tony Shalhoub, and Marin Hinkle. The story centers on Miriam “Midge” Maisel (Brosnahan), a wife and homemaker on New York City’s Upper West Side, in the late 1950s and early ’60s. After her husband, Joel (Zegen), leaves for his secretary, Midge discovers a talent for standup comedy and pursues her new dream all the way to The Tonight Show Starring Johnny Carson.