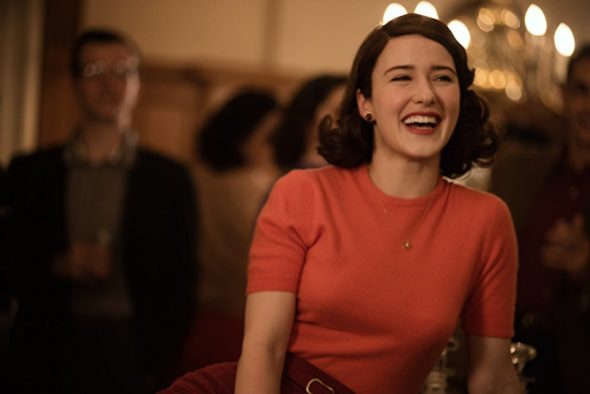 How long will Miriam Maisel keep ’em laughing? Has The Marvelous Mrs. Maisel TV show been cancelled or renewed for a second season on Amazon? The television vulture is watching all the latest TV cancellation and renewal news, so this page is the place to track the status of The Marvelous Mrs. Maisel, season two. Bookmark it, or subscribe for the latest updates. Remember, the television vulture is watching your shows. Are you?

Streaming on the Amazon Prime Video paid subscription platform, The Marvelous Mrs. Maisel stars Rachel Brosnahan, Michael Zegen, Alex Borstein, Tony Shalhoub, and Marin Hinkle. The story centers on Miriam “Midge” Maisel (Brosnahan), a wife and homemaker on New York City’s Upper West Side, in the late 1950s and early ’60s. After her husband, Joel (Zegen), leaves for his secretary, Midge discovers a talent for standup comedy and pursues her new dream all the way to The Tonight Show Starring Johnny Carson.

Fans don’t have to spend the first season wondering whether Amazon will cancel or renew The Marvelous Mrs. Maisel. When Amazon ordered it to series, they picked up the first two seasons. Unless they decide to publicize viewership though, we won’t have any “ratings” data, so I’ll keep an eye on the trades and update this page with breaking developments. Subscribe for free alerts on The Marvelous Mrs. Maisel cancellation or renewal news.

5/21/2017 Status Update: The Marvelous Mrs. Maisel has been renewed for a third season. Details here.

What do you think? Are you happy The Marvelous Mrs. Maisel TV show is renewed for seasons two and three? How would you feel if Amazon had cancelled this TV series, instead?

It is a great show — with superior acting and writing. The lead actress is just phenomenal — her character is both funny and strong…I want more.

Please renew this series. It is fabulous. The marvelous mrs Mariel is funny , fresh and very enjoyable