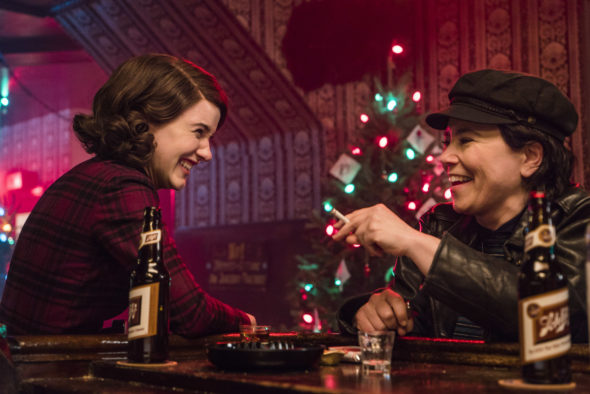 Warm up your funny bone. Although they’ve only released one season thus far, Amazon has renewed The Marvelous Mrs. Maisel TV show for a third season, with a start date TBD. It will likely consist of 10 episodes. Season two, which was part of the initial series order, is expected to drop later year.

An Amazon comedy drama, The Marvelous Mrs. Maisel stars Rachel Brosnahan, Michael Zegen, Alex Borstein, Tony Shalhoub, and Marin Hinkle. The story centers on Miriam “Midge” Maisel (Brosnahan), a wife and homemaker on New York City’s Upper West Side, in the late 1950s and early ’60s. After her husband, Joel (Zegen), leaves for his secretary, Midge discovers a talent for standup comedy and pursues her new dream all the way to The Tonight Show Starring Johnny Carson.

The Marvelous Mrs. Maisel Renewed for Season Three on Amazon

[Amy Sherman-Palladino] creator-executive producer of “Mrs. Maisel” prodded Amazon executives about a pickup on Saturday night as she accepted a Peabody Award for her 1950s-set dramedy about an Upper West Side housewife who ventures into standup comedy after her picture-perfect marriage falls apart.

“You’re going to give it to us because we’re bringing home the fancy thing, right?” Sherman-Palladino said of the Peabody win for the show’s freshman season.

Amazon Studios head Jennifer Salke, who attended the ceremony at Cipriani Wall Street, confirmed after the kudos concluded that “Mrs. Maisel” would indeed get a greenlight for a third season. “Mrs. Maisel” was initially ordered by the previous Amazon regime with a two season commitment spread across 18 episodes. Season 3 will likely get 10 installments.

What do you think? Did you enjoy the first season of The Marvelous Mrs. Maisel TV series? Do you plan to check out seasons two and three on Amazon? Let us know, below.

My husband and I thoroughly enjoy watching the adventures (and misadventures) of Midge and all those around her. Tony Shaloob is terrific, and we especially enjoy the chemistry between Midge and Susie. We look forward to the new season 3! All those period costumes are so wonderful! I’m sure that if I was still living & working in NYC, I’m sure that people would talk about the show the way we talked about “Seinfeld” back in the 90s.

Fantastic show. The best on amazon

Funniest thing I have ever seen on TV. Very pleased to know there will be more episodes.