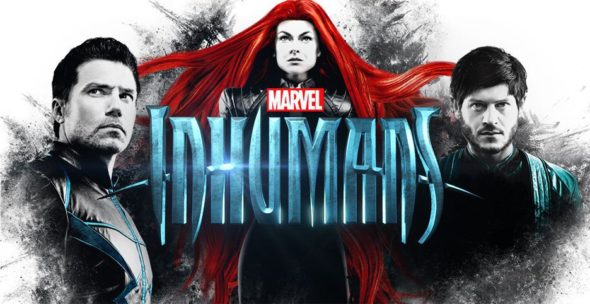 It’s looking even more likely that Marvel’s Inhumans TV show will be cancelled by ABC. Above and beyond floundering in the bottom of the ratings’ barrel, it seems like word of the cancellation could be leaking to the larger ABC-Marvel television family. During last weekend’s Heroes and Villains Fan Fest San Jose panel, Marvel’s Agents of SHIELD star Ming-Na reportedly almost used the word “cancelled,” when answering a fan’s question about potential crossovers between the ABC TV series.

An ABC series set in the Marvel Cinematic Universe, Marvel’s Inhumans stars Anson Mount, Iwan Rheon, Serinda Swan, Eme Ikwuakor, Isabelle Cornish, Ken Leung, Ellen Woglom, Sonya Balmores, and Mike Moh. Created by Scott Buck and based on the Marvel Comics by Stan Lee and Jack Kirby, Marvel’s Inhumans explores the Inhumans’ Royal Family. The sci-fi action drama centers on the mysterious Black Bolt (Mount), King of the Inhumans, and the Royal Family. Following a coup, they must reunite and try to save themselves and the world.

Will Marvel’s Inhumans Be Cancelled by ABC?

During her panel at Heroes and Villains Fan Fest San Jose, Ming-Na Wen attempted to multitask by calling former Agents of SHIELD co-star Brett Dalton (Grant Ward) at the same time that she was answering fan questions. The question happened to be about the possibility of a crossover between Agents of SHIELD and Marvel’s Inhumans.

“I think that show got-” Wen said and then stopped short before laughing and admitting that, “Maybe I can’t multitask.”

She stopped before saying the keyword, but if you watch the video above it definitely sounds like was about to say that Inhumans was canceled. That news probably wouldn’t surprise anyone. Its first season did poorly as an IMAX event, was bashed by critics and fans, and failed to generate much in the way of ratings for ABC.

Here’s the video, referenced in the above report.

The first season of Marvel’s Inhumans averaged a 0.62 rating in the 18-49 demographic and 2.56 million viewers. When sorted by either measure, Marvel’s Inhumans currently ranks 16th out of the 18 scripted ABC TV shows we’re tracking.

Saving a freshman series from cancellation, when its numbers are that low, would be an inhuman feat, to say the least. When we hear more on a Marvel’s Inhumans cancellation or renewal, we’ll let you know.

What do you think? Are you a fan of the Marvel’s Inhumans TV series? Should it be cancelled or renewed for a second season on ABC? Let us know, below.

No I don’t think it should be cancelled can do a little better.

need to renew for sec season

I enjoyed the show, but I sadly doubt it will be back as it was being set up for a fall from the start through fan-driven hatred of anything non-X men. It was well cast, well acted and I hope that, if it is the end, it can cross-feed some cameo elements into SHIELD to at least give the fans it has gained some closure.

I hope Marvel’s Inhumans will not be cancelled

I watched the whole show, hoping it would get better. There was very little character development and it was badly written. I did not feel any type of connection, or empathy, or attachment to any of the characters. Ok, I liked the dog. I watched The Gifted and even though the show needs a bit more work, it is more interesting than the Inhumans. With Inhumans I felt the same way as when I buy a comic mini series and it looks pretty and interesting but the story is lacking, and you still buy the whole mini series because you… Read more »

Neither good or bad at least watchable but I Bought season 1 on iTunes and maybe get the second season or maybe not.

I really liked this show and it didn’t really have a chance to get started. I’m not sure why a lot of people hated it so much either. My mom, my friends, and I liked it. I know there were some issues but it can be improved in the next season. Half seasons never give a any show a chance to really find it’s footing. Really sad it will likely be cancelled.

Unfortunately, because most people don’t know those characters that well, they had to take the time to build the characters. I think the network made poor choices for time slot and DID NOT SUPPORT THE VENTURE from day one like they should have. I was hearing rubies of cancellation BEFORE THE FIRST SHOW EVEN AIRED. So tired of networks trying to make our decisions for us. I long for the days when we actually get a choice. LOL Not likely.

I would miss the big huge dog.

Marvel’s Inhumans is a Phenomenal show. Well acted, well written, intriguing, and intelligent. This show is a diamond that wasn’t given enough time to succeed. One more season would see this series skyrocket! Not sure if anyone remembers but the Walking Dead’s first season wasn’t great. Look at them now.
ABC should have the insight to keep it. If it is canceled, another, very smart network should pick it up. This was the best series in 2017. I dare you to find another.

Alrighty okay then now listen up good “Marvel’s Inhumans” Television Series/Television Show has been now become part of the Marvel Comics Universe and it wasn’t a bad show it did introduce new Characters and shown some major potential but overall ABC shouldn’t cancel it because there’s so much more can be done also YES crossovers between “Marvel’s Agents Of S.H.I.E.L.D. and Marvel’s Inhumans” also even more do connecting with the other”Marvel’s Series on Netflix” just don’t fully give up on it ABC renew it for a 2nd Season plus I promise You that You’ll see how/what I mean for its… Read more »

This is a great show, always cancelling a good syfy show. Let Anson Mount start talking and the rating will go up. Let this show cross over with the other Marvel shows. I love this show!

His character cannot talk due to his powers… It’s been that way in the comics for 50 years so to change it in the show would be a disservice to the character.

I think the show was not given a chance to succeed and 3 things were the cause. 1) The writing was not the best, why in the world would you maim the powers of one of the Royal family the way they did? STUPID. You mean save money on CGI effects with her hair? You mean make it so the actress has no reason to act? 2) The show was showing on Friday evenings, the night many people are out, the night most shows are moved to in preparation for their cancellation. This show deserved to be on an earlier… Read more »

Inhumans has horrible acting and really bad effects. I wish it were better, never missed an episode. But it’s not a winner.