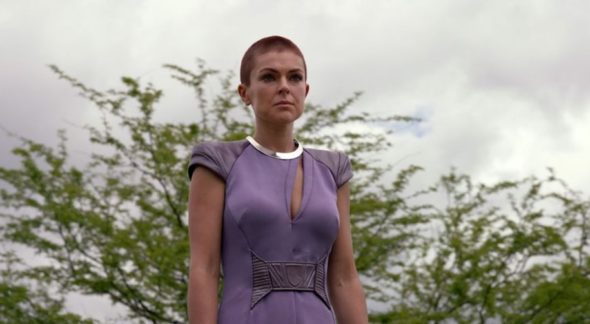 Will there be another season for Marvel’s Inhumans? ABC boss Channing Dungey recently weighed in on the low-rated series’ future, TVGuide reports.

The sci-fi drama centers on the mysterious Black Bolt (Anson Mount), King of the Inhumans, whose voice is so powerful that even his mere whisper can wipe out a city. After a coup fractures the Royal Family, they must reunite and try to save themselves and maybe Earth, as well. The cast includes Iwan Rheon, Serinda Swan, Eme Ikwuakor, Isabelle Cornish, Ken Leung, Ellen Woglom, Sonya Balmores, and Mike Moh.

At this year’s TCA winter press tour, Dungey was not optimistic about a second season for Marvel’s Inhumans:

Inhumans was a really big swing for all of us which I don’t think quite landed with the impact we would have wanted. The numbers were a little disappointing. We didn’t quite stick the landing. We haven’t made any firm decisions yet, but I think that one’s a longer shot.”

What do you think? Did you see Marvel’s Inhumans? Would you watch a second season?

Well my family loved it and would be gutted if it does not return at the end of the day it was only just getting started.you need moor time to learn about the people ECT

I and my family would definitely like to see a second season of Inhumans. Would like to know how they come up with their amount of people watching because I know I was not part of that survey.

This is a wonderful series, I very much am looking forward to a second season.

I really did like Marvels Inhumans a lot. I think it’s got a great cast and I love the storyline. But my favorite show on any network is Marvels Agents of Shield and as long as you keep AOS I would love to see Inhumans back for a second season. Thanks

Needs a seacond chance… ….needs to improve on the writing!!!

I gave it a try, but it was bad

YES, They should give “Marvel’s Inhumans” another Season because it’s just the beginning of the Story and the ABC Network Television Series/Television Show needs to consider making more Episodes for a 2nd Season especially the continuation about/of the Storyline on the Moon and Earth involving the Inhumans plus The Royal Family You just can’t keep Us on a Cliffhanger so this is My opinion, suggestion also recommendation to renew the TV Show!

I would probably give season 2 a shot with the hope that they bring it up to the standard Marvel has set with it’s other shows and movies.