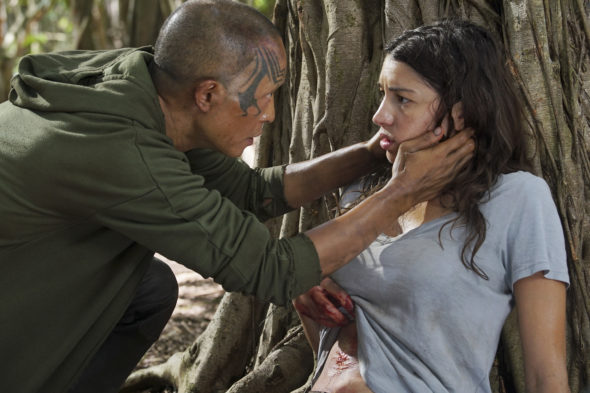 Can we chalk this up to man’s inhumanity to man? ABC has cancelled Marvel’s Inhumans TV show after just one season. The sci-fi series, which had a disappointing launch in IMAX theatres in September of 2017, never really caught on — at least in Nielsen households. The cancellation has been widely assumed to be all but confirmed for months.

An ABC superhero drama, Marvel’s Inhumans stars Anson Mount, Iwan Rheon, Serinda Swan, Eme Ikwuakor, Isabelle Cornish, Ken Leung, Ellen Woglom, Sonya Balmores, and Mike Moh. Created by Scott Buck and based on the Marvel Comics by Stan Lee and Jack Kirby, Marvel’s Inhumans explores the Royal Family, led by Black Bolt (Mount), King of the Inhumans. After a coup separates them, they must reunite and try to save themselves and the earth.

News of the Marvel’s Inhumans cancellation has been percolating for a while. On December 5th, we reported Marvel’s Agents of SHIELD star Ming-Na almost used the word “cancelled,” when answering a fan’s question about potential crossovers between the ABC TV series during a panel.

On January 10th of this year, we also reported that ABC Entertainment President Channing Dungey was not all that optimistic about Marvel’s Inhumans‘ chance of survival, during the 2018 TCA winter press tour. A couple of weeks later, Disney-ABC removed the series from its press site, but later restored it.

The first season of Marvel’s Inhumans averaged a 0.62 rating in the 18-49 demographic and 2.56 million viewers. It was one of the lower-ranked, scripted ABC TV shows.

What do you think? Did you like Marvel’s Inhumans TV series? Should ABC have cancelled or renewed it for season two?

Though the series was moving slowly, I had enjoyed it and was looking forward to season two and how it would play in with other Marvel shows. I they they cut it too soon and if nothing else should allow Netflix to take over and run season 2. I also felt it’s weekly time slot was poorly placed.

WHY? PLEASE RENEW AS I AM WAITING PATIENTLY FOR SEASONS 2, I AM SUCH A HUGE FAN AND VERY DISAPPOINTED THE SHOW IS CANCELED, THERE ARE THOUSANDS AND THOUSANDS LOOKING FORWARD TO THE NEXT SEASON,

I really wanted another season.

I said again, LOVED this show, however that makes 2 show’s we loved,Your stupid butt’s are taking away . The Crossing, too, you are all so stupid, however, I am grateful, for you helping us find great show’s, like these on NETFLIX, so keep it up so more an more of us turn to NETFLIX.

I really enjoyed the show. It just proves how disconnected the networks are from what the people really like and how the Nielson rating system is broken.

I think we need to change who has the Nielson installed in their homes! You need people that enjoy all types of genres not just certain type of shows. I liked this show and think it has much potential, but I’m just a viewer that enjoys scifi, your Nielson households probably enjoy those mindless comedies that have adults running around acting like 8 year olds.

Really loved Marvell’s In humans. My husband and I was so mad when we heard it wasn’t coming back on but yet they keep stupid shows . I loved lockjaw. Please bring it back ,It is a good show.

I liked the show and believed they didn’t give it enough of a chance, they should have done another season and done more with the show the had all the leg work going from all the other movies and shows come on show some imagination. It would have been great. like the cartoons

I absolutely adore lockjaw plus the show is wonderful!!! It is like the beginning of XMen coming to earth to help us puny humans….wow, we need heroes like INHUMANS TV SERIES AS WELL AS THE ORIGINALS TV SERIES! WOW OVER 2 MILLION VIEWERS DOESNT SATISFY YOU ABC, NBC. CBS, ETC HIGHER UPS… you are ridiculous people for cancelling many other shows…its so disappointing and hard to get into new shows because over 2 million viewers are not enough!!!! It is truly bs…

No surprise as it was easily the weakest of all the Marvel efforts.

Anything good is always cancelled. Grimm is a perfect example. Cancelled after the first season yet turned out to be one of the best sci-fi shows on tv.

Someone
Reply to  Dave

Neither good or bad show but one thing was true about it, it was Not a enjoyable show.

It was a great show, I have no idea what you are talking about. The Inhumans are great and so was the show.