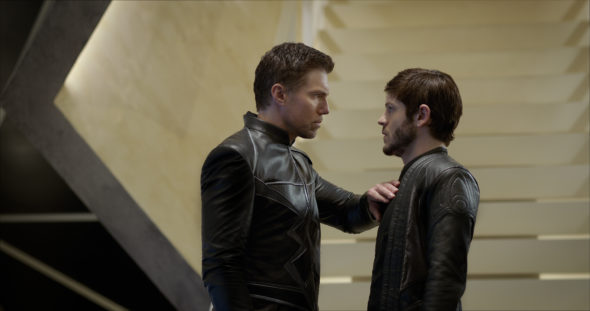 What will become of King Black Bolt and the Inhuman Royal Family? Has the Marvel’s Inhumans TV show been cancelled or renewed for a second season on ABC? The television vulture is watching all the latest cancellation and renewal news, so this page is the place to track the status of Marvel’s Inhumans, season two. Bookmark it, or subscribe for the latest updates. Remember, the television vulture is watching your shows. Are you?

Airing on the ABC television network, Marvel’s Inhumans stars Anson Mount, Iwan Rheon, Serinda Swan, Eme Ikwuakor, Isabelle Cornish, Ken Leung, Ellen Woglom, Sonya Balmores, and Mike Moh. Created by Scott Buck and based on the Marvel Comics by Stan Lee and Jack Kirby, Marvel’s Inhumans explores the Inhumans’ Royal Family. The sci-fi drama centers on the mysterious Black Bolt (Mount), King of the Inhumans, whose voice is so powerful that even his mere whisper can wipe out a city. After a coup fractures the Royal Family, they must reunite and try to save themselves and maybe Earth, as well.

Will ABC cancel or renew Marvel’s Inhumans for a second season? The ratings have been terrible, even for a Friday night show. Though ABC gives their Marvel shows some leeway, I don’t expect this series to be renewed.  Subscribe for free updates on any Marvel’s Inhumans cancellation or renewal news.

5/11/18 update: ABC has cancelled Marvel’s Inhumans so there won’t be a second season. Details here.

What do you think? Were you hoping that the Marvel’s Inhumans TV show would be renewed for a second season? Are you sorry that ABC cancelled this TV series, instead?

I don’t know if any decision makers will see these comments. I just finished the first season on Disney+. I would love to fine out what happens next. Please bring this show back!

Please please please bring INHUMANS back, it’s a very unique series and with sci-fy shows becoming more and more on tv I believe it would be welcomed back with open arms. Thank you

I watched this series on Disney+ and thought it was very good. could have been better, but that the heck, better than most out there. Let’s start a petition to get it back.

I watched the entire season. I thought it did exactly what it was supposed t do. It had strong character development and a great lead in to season two. I figure there was a lot of expectation for this show because Season one was more of an introduction for a saga length series. The problem or reason for cancellation was probably politic. The last scene looked a bit FEMA and the powers are trying to drop that topic hard and out of site. Its a shame. The second season would have had a lot going on and it would have… Read more »

I liked it A LOT!! Didn’t know if I would but it surprised me and I couldn’t wait for each episode, then I couldn’t wait for it to return. Now I am mourning yet another show I’ve been looking forward to. So awful for these shows ( you’ve mentioned several) that the viewer gets involved in and really want to see an ending at the very least, not a cancellation! From now on I’m going to be watchful of where any shows I want to watch ate coming from.. CBS, NBC etc and will have a difficult time tuning in… Read more »