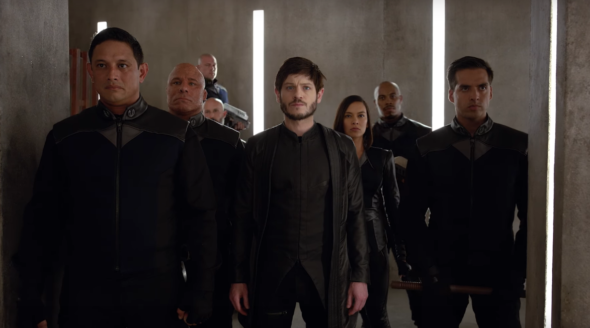 The superhero drama centers on the mysterious Black Bolt (Mount), King of the Inhumans, whose voice is so powerful that even his mere whisper can wipe out a city. After a coup fractures the Royal Family, they must reunite and try to save themselves and maybe Earth, as well. The cast includes Anson Mount, Iwan Rheon, Serinda Swan, Eme Ikwuakor, Isabelle Cornish, Ken Leung, Ellen Woglom, Sonya Balmores, and Mike Moh.

It’s likely the upcoming season finale for Marvel’s Inhumans could be its series finale. The freshman show has been performing poorly in the ratings since it debuted in September. Currently, the ABC drama is averaging a .69 rating in the 18-49 demo and only 2.912 million viewers, making it one of the network’s lowest-rated series for the 2017-2018 season so far.

However, it is entirely possible ABC will pickABC up Marvel’s Inhumans for a second season. The network’s parent company, Disney, also owns Marvel and has a vested interest in keeping Marvel series on the air.

The season one finale of Marvel’s Inhumans premieres on ABC on November 10th at 9 p.m. ET/PT.

Check out the synopsis below:

BLACK BOLT MUST STOP MAXIMUS ONCE AND FOR ALL, ON THE EPIC SEASON FINALE OF ABC’S ‘MARVEL’S INHUMANS’

“… And Finally: Black Bolt” – It’s brother versus brother as the final showdown between Black Bolt and Maximus takes an unexpected turn – one with lasting consequences for all of Inhumanity, on the exciting season finale of “Marvel’s Inhumans,” airing FRIDAY, NOV. 10 (9:01-10:01 p.m. EST), on The ABC Television Network.

The series is executive produced by Scott Buck, along with Marvel’s Jeph Loeb and Jim Chory with Buck serving as showrunner. This series is a Marvel and IMAX project and is co-produced by Marvel Television and ABC Studios.

“… And Finally: Black Bolt” was written by Rick Cleveland & Scott Reynolds and directed by Billy Gierhart.”

What do you think? Are you watching Marvel’s Inhumans? Would you watch a second season?

I love this show. I live the characters. PLEASE don’t cancel it, I am so tired of watching something enjoyable only to have it yanked. I don’t have to fast forward through foul language, and or inappropriate scenes.

I love the show! So many of my friends do as well. I want to see more of this story! Please keep it going! Thankyou!

I am watching it and would definitely watch a season 2.

We are enjoying it, I love the dog.

I love the show, the more I watch the interesting it gets. I wish the networks weren’t so quick to cancel…. sometimes shows start off slow but pick up momentum as they go. You have to give people a chance to see the shows due to work schedules and fast pace life. Please give it at least a second season I really enjoy the series it’s a break from the usual.

They cancelled Agent Carter for that? come on ABC! bring it back!!

Please cancel that horrible show and save the money for other (better) shows… This show is just an insult to every fan out there.

While it’s not the greatest show I’ve ever seen, it’s not that bad. Agents of Shield got off to a slow start and during it’s first season I saw a lot of people saying that it sucked, that it should be canceled, etc. So, not that much different from Inhumans.

Of course if they don’t renew it, it’s going to suck not having any closure for the obligatory cliffhanger that the season is sure to end on.

I like the show, however, the pace is a bit slow. Character driven action/drama with almost no action, and very little drama. I hope it improves.

I kind of like the tv show mainly because I love comics. But certainly it is not among my favorite shows of this year.