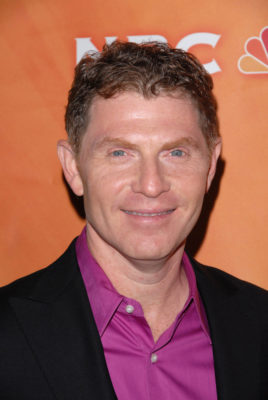 Flay has competed on the popular cooking series since 2000. Hosted by Alton Brown, the competition program pits professional chefs against each other in a timed cook-off based on a secret ingredient or theme.

According to Vanity Fair food writer Allen Salkin, Flay appeared at a recent taping of Iron Chef Showdown wearing a shirt that read “THIS IS MY LAST IRON CHEF BATTLE EVER.” As of now, it’s unclear if Flay really does intend to leave the long-running series or if Food Network will air/edit the upcoming episode.

What do you think? Are you a fan of Iron Chef? Would you still watch without Flay?

Do not watch this show, really don’t like it.

i want more iron chef showdown….. when are there going to be more show?

I have watched all of the Holiday Baking Championship shows and am ready for others like that. Am not crazy about Iron Chef Showdown but I do like the Iron Chef behind the scenes, Chopped, Chopped After Hours, anything but GUY FIERI! Please, please put something on other than him at all times of the night!!

I agree, enough of Guy Fieri!!

Way too much Bobby Flay on the Food Network…I hope he is really leaving, not just the show, but the network. Buh-Bye Bobby!

I would much rather they get rid of Guy Fieri than anyone else. They should change the name of the channel to Guy Fieri network!!! WAY TOO MUCH of him. I love watching the other shows on this network but they seem to be few and far between!

Bobby Flay already does this show (beat bobby flay) not sure why iron chef thought they had to go this route but I will still watch Flay or no Flay.

I want a Sandra Lee type show back on the Food Channel. I loved how the set always matched her outfits and it was fun to see her tablescapes. And, how about holiday specials? No more game type stuff.

I WOULD STILL KEEP WATCHING ANY FOOD SHOWDOWN

Yes. I am definitely a fan of Bobby Flay. Please continue because I am a cook and I pick up many many hints from you.