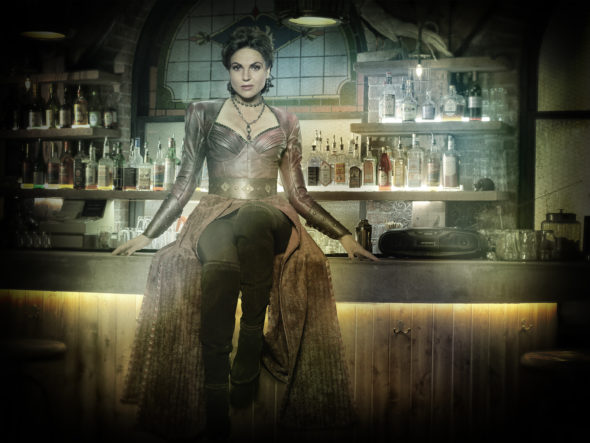 Does true love still conquer all — even big cast changes and a reboot? Is the Once Upon a Time TV show cancelled or renewed for an eighth season on ABC? The television vulture is watching all the latest cancellation and renewal news, so this page is the place to track the status of Once Upon a Time, season eight. Bookmark it, or subscribe for the latest updates. Remember, the television vulture is watching your shows. Are you?

Once Upon a Time, season seven, is a reboot of the story fans watched during the series’ first six installments. With Emma (Morrison), Snow (Ginnifer Goodwin), Charming (Josh Dallas), and Belle (de Ravin), off the canvas and young Henry Mills (Gilmore) now an adult (West), the page has turned. Now, seasoned Enchanted Forest denizens must help Henry and his daughter, Lucy (Fernandez), battle evil and return hope to their world and ours. And of course, they’ll have to deal with yet another pesky curse.

The seventh season of Once Upon a Time averaged a 0.50 rating in the 18-49 demographic and 2.31 million viewers. Compared to season six, that’s down by 46% and down by 27%, respectively. Find out how Once Upon a Time stacks up against other ABC TV shows.

The ratings have been terrible on Friday nights. I would say that Once Upon a Time would be cancelled for sure but I’ve heard that the series remains profitable for the network and studio. I’ll keep this page updated, so subscribe for free updates on any Once Upon a Time cancellation or renewal news.

2/6 update: While not specifically using the word “cancelled,” ABC has decided to end Once Upon a Time with season seven. Details here.

What do you think? Did you think ABC would cancel or renew Once Upon a Time for season eight? Is it ending at the right time, or should it have continued (or ended earlier)? Sound off, in the comments.

Please bring back Once Upon a Time absolutely loved the show also Witches of East End. All the GOOD shows gets Canceled.

Please bring back once upon a time.

I Truly believe this show has so much potential to continue on for many many more seasons. Not only did this show bring all of our favorite Disney stories to life but it also kept alive some forklore and legends we all know and love. Once Upon A Time changed the way we looked at life with such amazing writing and carefully selected actors. This show has been my nerd for 7 years. I would be sad if it stopped at 7 seasons. Still, I will always love and continue to watch it through out my years! I would love… Read more »

Please bring once upon a time back

We as a mother and daughter do not watch TV series ,but watching Once Upon a time has been our ritual not just because it is a great show. But, the lesson it teaches you Good over Evil , about second chances, about hope , love , Family. That villains can change and people learn and grow. We request you to please continue making great stories. As they said “its not Over”; I am sure there is lot to show about and inspire many people out there. There are more Fairy stories legends that can be connected. It is such… Read more »

anonymous
Reply to  A mother

Except what you said about the villains changing were wrong. In case you forgotten or didn’t pay attention carefully, there was living proof that the villains never changed. 1) Regina was still left lying about the murder Sheriff Gramm, and she only got her darkness back without getting rid of it again, she murdered innocent people and didn’t other victims’ hearts back; 2) Hook is still a liar, he has never given up his ship cause he got it back, he murdered Charming’s father (and that story was left unfinished, and it will only end with him dead and gone),… Read more »

Did you not see rumplestilskin take his life to protect everybody else and yes he may be a villain but at the end of the series he gets.his happy ending with Belle so yes.villians can change

Except his death completes the loose end of the prophecy where Henry becomes his undoing. And it finally got it’s ending.

I LOVE That show

don’t cancel Once Upon a Time! I just discovered it, on Netflix, and I watch it every weekend!! I never watch network TV channels at all, because I am not home when they’re playing the shows I like.

Please don’t cancel this show!!! It is the best one I have ever watched. It took me a long time to finish all seven seasons but it deserves an eighth! The plot is so good and so many will be disappointed if it doesn’t go on.

Y’all shouldn’t cancel once upon a time its really good.The actors are amazing they really help me get the feeling of the situation.I love the show so much i have watched them 3 times going on the fourth time. Please please make more episodes and season.

im on season 7 you should make a season 8. i love this show sm i wouldnt have new abt it if it wasnt for my sister

Then go give feedback to Disney Plus for it. They take feedback and requests.

For those of us who binged it on Netflix, PLEASE do another Season!?!? SOMEHOW bring Robin back!!!!!