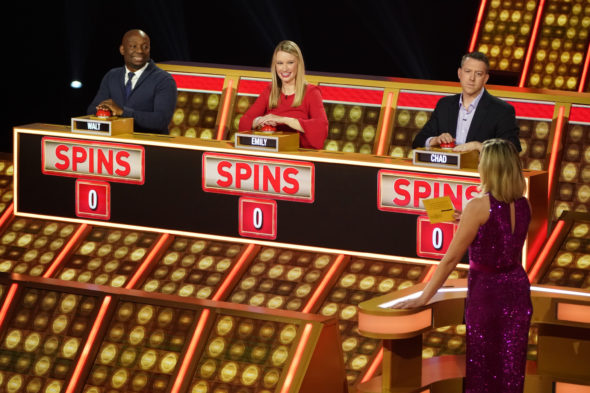 Will this game show get “whammied”? Has the Press Your Luck TV show been cancelled or renewed for a third season on ABC? The television vulture is watching all the latest cancellation and renewal news, so this page is the place to track the status of Press Your Luck, season three. Bookmark it, or subscribe for the latest updates. Remember, the television vulture is watching your shows. Are you?

Airing on the ABC television network, Press Your Luck is a primetime revival of the 1980s daytime game show which ran for three seasons on CBS. Hosted by Elizabeth Banks, the series features three contestants squaring off to answer questions, while trying to avoid getting wiped out by the “WHAMMY,” in a quest to win cash and prizes.

Find out how Press Your Luck stacks up against other ABC TV shows.

Will ABC cancel or renew Press Your Luck for season three? The network’s summer game shows are relatively inexpensive to produce and have become a summer staple. I think Press Your Luck will be renewed. I’ll update this page with breaking developments. Subscribe for free alerts on Press Your Luck cancellation or renewal news.

4/8/2021 update: Press Your Luck has been renewed through a third season.

What do you think? Are you glad that the Press Your Luck TV show has been renewed for a third season? How would you feel if ABC cancelled this TV series, instead?

Put press your luck back on television! Everything something is good you take it off!

Where’s our Press Your Luck ? I Love this game show. Loved it when it was originally on.
Hasn’t been on. Is it because of the Playoffs ?

How do I become a contestant on whammy?

I do hope this show comes back on. There isn’t anything else worth watching in my area. Currently TV sucks! All reruns of shows that should be cancelled or archived permanently.

What are the next 4 episodes in Season 2 called?

Yes it should be renewed I love the show. It’s great and fun to watch.

I love this show so much a friend bought me a T-shirt. I look for this show every week. This is by far my most favourite game show. I love to watch game shows but I love this so much I actually want to be a contestant so bad❤️I hope bring show back

I love that,show and elizabeth. Sure hope it’s not canvelled.

They need to renew this show not just for summer but all year round its exciting and very touching Elizabeth banks is a great host .

One Of the highlights of my week is watching Press your Luck! Elizabeth Banks is so energetic, enthusiastic and gets the audience involved that they cheer for all the contestants. I live alone but find myself yelling at the TV and cheering. I even react when there’s a whammy. Please keep the show on the air. There aren’t too many programs on TV that entertain seniors like Press Your Luck!

Can it be a regular show thought the year

This show is AWESOME. We never miss it. Elizabeth Banks is really good at this too. Who would have thought she would be the host of a game show…but it works!! Lots of fun to watch.