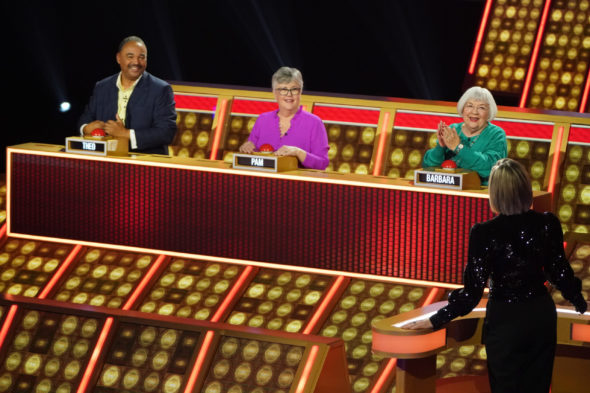 Press Your Luck is returning to ABC with brand new episodes later this month, and the first episode back will be a special one. Some of the contestants from the original CBS run of the game show are returning, some 35 years later, for another chance at big bucks.

ABC revealed more about this special episode in a press release.

“On an all-new episode, legendary contestants from the original series return 35 years later to try to win those BIG BUCKS on Press Your Luck, airing THURSDAY, SEPT. 24 (9:00–10:01 p.m. EDT), on ABC. (TV-PG, L) The stakes have never been higher as contestants try to avoid the iconic and devilish WHAMMY again for a chance at life-changing cash and prizes. Host Elizabeth Banks is joined by contestants Theo Cooper (hometown: Hawthorne, California), Pam Kirk (hometown: Apple Valley, California) and Barbara Krant (hometown: Victorville, California). Episodes can also be viewed the next day on demand and on Hulu.

During each game of Press Your Luck, three contestants compete against each other answering questions to earn spins on the Big Board. Contestants then use their spins to win cash and prizes while trying to avoid the WHAMMY, who could take all of their winnings and leave them with nothing. The winning contestant moves on to the all-new bonus game to face the WHAMMY in a final battle for the opportunity to win $1 million.”

What do you think? Did you watch the original run of Press Your Luck? Will you watch this special episode on ABC later this month?

I truly enjoy Press Your Luck because I love the way that one of the panels went crazy and I love the look on their face when they lose all their money and prizes. It is wild to see how they handle theirs losses.

Definitely going to watch, used to watch 35 yrs ago…wish I could be a contestant for this season…would be my dream come true! LOVE ELIZABETH BANKS, She’s the perfect pick as a host!