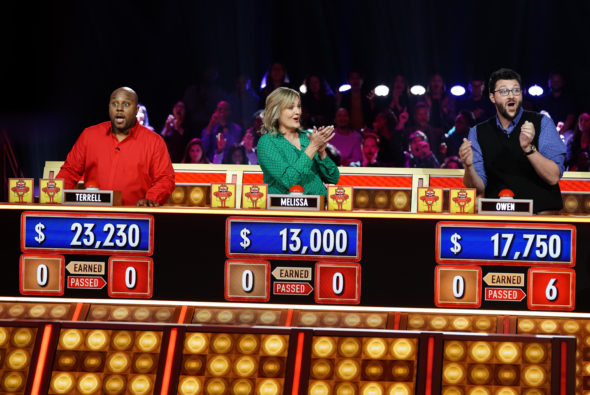 How lucky do you feel to be watching the first season of the Press Your Luck TV show on ABC? As we all know, the Nielsen ratings typically play a big role in determining whether a TV show like Press Your Luck is cancelled or renewed for season two. Unfortunately, most of us do not live in Nielsen households. Because many viewers feel frustration when their viewing habits and opinions aren’t considered, we’d like to offer you the chance to rate all of the Press Your Luck season one episodes here. *Status update below.

What do you think? Which season one episodes of the Press Your Luck TV series do you rate as wonderful, terrible, or somewhere between? Should ABC cancel or renew Press Your Luck for a second season? Don’t forget to vote, and share your thoughts, below.

It’s time for some wholesome television to return and this begins with game shows. All of them should return and get all this reality crap off. The reason they are getting mediocre ratings is because people don’t know what they are. All they’ve had to watch for 10+ years is reality junk.

I really like the Show Press Your Luck, I really enjoyed the Special on that guy in 1984 who beat the computer and won.I have someone to replace the Whammy, she resembles Tweedle Dee and Tweedle Dum from Alice in Wonderland. It was sad about Toarken and his wife going to get medical help for someone in via his airplane which crashed and cost them there lives. My wife is from the Ukraine and loves it. Name is CAL not CAK like above.

Bring back this show please

I really enjoy Press Your Luck. I like the quick reversals of luck. I especially like the prizes that are tailored to the personal interests of the contestants. I look forward to this show.

Love love love this show!!!
Please do not cancel it
I look forward to it every week
Love the excitement
The inner challenges if human nature and how greed and hope intertwine!!!

Love the show. Love the host Elizabeth Banks. Please do not change the host unless Elizabeth wants to leave otherwise she is great.

I totally agree. She is a great host. She is a natural. She is not over the top. Funny and compassionate when appropriate. Love the new take on the show. There is nothing I would change. I like also how at the end, they ask them to go all the way through even after they decided to call it quits, just so we could see if they would have won or got a whammy. This has become my favorite retro bring back game.

Fantastic this game show takes me back to the 1980’s to the early 1990’s to the mid 1990’s! We need more oldschool game show’s back on tv to replace those annoying reality shows on tv!

I watch a few reality shows but would have watched this if I had known it was even on.