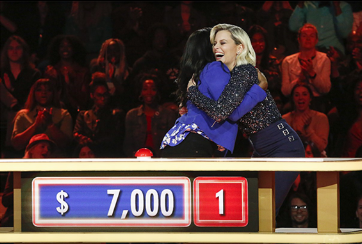 Game show fans are in luck. ABC jut announced they are airing a special early premiere of Press Your Luck on June 11th.

Hosted by Elizabeth Banks, the game show follows three contestants as they “compete against each other answering questions to earn spins on the Big Board. Contestants then use their spins to win cash and prizes while trying to avoid the WHAMMY, who could take all of their winnings and leave them with nothing.” The original series ran from 1983 to 1986.

An early premiere of Press Your Luck debuts on ABC on June 11th at 10 p.m. ET/PT.

ABC IS EAGER TO FACE THE WHAMMY AND ‘PRESS YOUR LUCK’ WITH A SPECIAL EARLY PREMIERE FOLLOWING ONE OF THE BIGGEST NIGHTS OF ‘THE BACHELORETTE’ ON TUESDAY, JUNE 11

Following one of the biggest nights and most dramatic dates of the season on “The Bachelorette,” airing TUESDAY, JUNE 11 (8:00-10:01 p.m. EDT), ABC will give viewers a special early premiere of the iconic game show “Press Your Luck” (10:01-11:00 p.m. EDT), on The ABC Television Network, streaming and on demand. Hosted by Elizabeth Banks, “Press Your Luck” is a game of wits, strategy and even higher stakes as contestants try to avoid the iconic and devilish WHAMMY for a chance at life-changing cash and prizes. “Press Your Luck” will continue with an all-new episode in its regularly scheduled time slot the following night, WEDNESDAY, JUNE 12 (8:00-9:00 p.m. EDT), on ABC.

Editor’s note: The scheduling change for “The Bachelorette” followed by the new premiere date of “Press Your Luck” is pending a Game 5 of the NBA Finals, scheduled for Monday, June 10. If there is not a Game 5, both episodes will air Monday, June 10 (8:00-11:00 p.m. EDT).

After weeks of drama and turmoil on “The Bachelorette,” one front-runner finally gets a one-on-one date with Hannah in the breathtaking scenery of Scotland, but the drama is far from over. Will this much-anticipated date take their relationship to new levels or to the edge?

During each game of “Press Your Luck,” three contestants compete against each other answering questions to earn spins on the Big Board. Contestants then use their spins to win cash and prizes while trying to avoid the WHAMMY, who could take all of their winnings and leave them with nothing. The winning contestant moves on to the All-New Bonus Round for the chance to win a fortune in cash and personalized prizes tailor-made specifically for them.

“Press Your Luck” is produced by Fremantle. The show is executive produced by Jennifer Mullin, Elizabeth Banks, Max Handelman and John Quinn, who also serves as showrunner.”

What do you think? Do you remember the original Press Your Luck series? Will you watch ABC’s revival?

Looking forward to it!! Watched the old ones will be watching the new ones!

I watched the original and plan to watch this one as well.