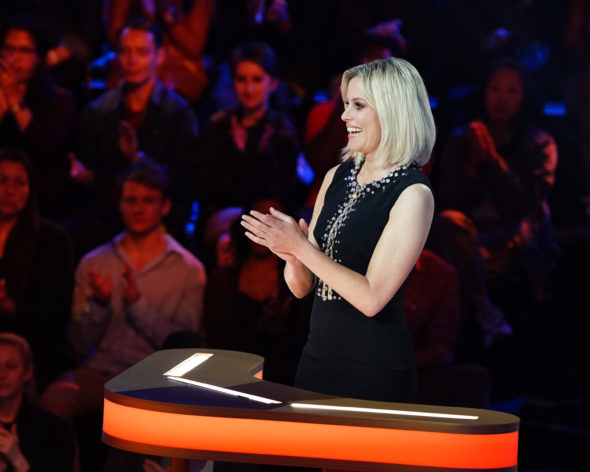 Do you feel lucky? Has the Press Your Luck TV show been cancelled or renewed for a second season on ABC? The television vulture is watching all the latest cancellation and renewal news, so this page is the place to track the status of Press Your Luck, season two. Bookmark it, or subscribe for the latest updates. Remember, the television vulture is watching your shows. Are you?

The first season of Press Your Luck averaged a 0.75 rating in the 18-49 demographic and 3.89 million viewers. Find out how Press Your Luck stacks up against other ABC TV shows.

Will ABC cancel or renew Press Your Luck for season two? Right now, I think it’s doing well enough to score a renewal. I’ll update this page with breaking developments. Subscribe for free alerts on Press Your Luck cancellation or renewal news.

What do you think? Are you glad that the Press Your Luck TV show has been renewed for a second season? How would you feel if ABC had cancelled this TV series, instead?

My husband and I love this show. We love game shows and Whammy/Press Your Luck is our favorite. Hoping it is renewed soon!! Also LOVE the host. She’s fabulous.

How can I get to be a contestant on Press Your Luck?

Please no whammies need our “PRESS YOUR LUCK “ BEST game show since 1983!

I spoke with someone at the show about being a season 2 contestant. They film in a few months. I can sat with a strong degree of certainty it got renewed

I would love to see Press Your Luck come back for another season I enjoy seeing it.I wish that I would stay on longer.

very best game show ever on TV !!! this has to be renewed!!

I enjoy the show except for the stupid whammy actions and the sound it makes. I like Elizabeth Banks but sounds like she is screaming half the time…irritating. Once the questions are done and they are just playing the board, I have to turn the volume down so I can enjoy it more.

Yes I like the game show but I like others games show better like to tell the truth card sharks 100.000 pyramid celebrity family feud the match game not so much

I love having press your luck back!
I think that the bonuses round is great I hope they add one more thing take the bank from the wammy show so you can Wammy the Wammy!

CANCEL it is a stupid show

Yes jill iam with you others games are better

Jill Brodnik, Press Your Luck is not a “stupid show”. It’s actually a good show. You don’t have to watch the show. But don’t ruin it for others.

Leave “Press Your Luck” alone & Renew It for another season.