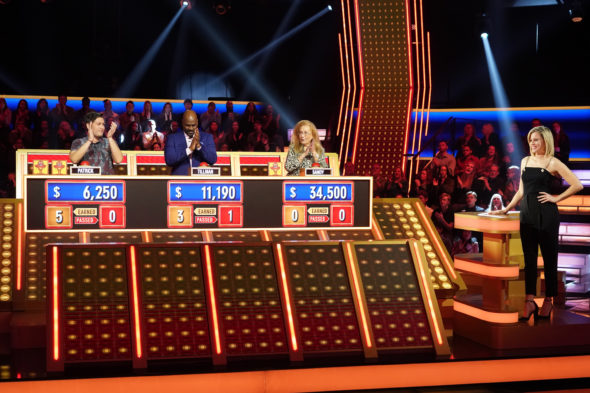 How much money will the Whammy steal in the second season of the Press Your Luck TV show on ABC? As we all know, the Nielsen ratings typically play a big role in determining whether a TV show like Press Your Luck is cancelled or renewed for season three. Unfortunately, most of us do not live in Nielsen households. Because many viewers feel frustration when their viewing habits and opinions aren’t considered, we invite you to rate all of the second season episodes of Press Your Luck here.  *Status Update Below.

What do you think? Which season two episodes of the Press Your Luck TV series do you rate as wonderful, terrible, or somewhere between? Do you think that Press Your Luck should be cancelled or renewed for a third season on ABC? Don’t forget to vote, and share your thoughts, below.

*4/8/2021 update: Press Your Luck has been renewed through a third season.

What happened to the next 4 episodes in Season 2 of Press Your Luck?

fantastic show to watch… and the hostess is great

The show is fun, exciting and totally unpredictable — so it is fun to watch and to pretend it is you! Nice to have a FEMALE hostess — too many males leading game shows. The WHAMMIES are unforgiving and in the “game of life” whammies can turn up any given moment — the prizes are fabulous and the big board dollar amounts are super amazing! No one on any game show (except maybe the WALL) can win so much money in cash and prizes for playing trivia and trying your hand against the odds (“the whammster!”) in one hour. Kudos… Read more »

I love this show! Elizabeth Banks is just the ball of energy we need in the middle of a pandemic. A little reminder that joy still exists in the world is making the long dog days of summer tolerable. Please, PLEASE keep these shows coming!

I love this show! Fun game…whammies are awesome… prizes are cool and Elizabeth Banks keeps it all in high gear! My family loves this game show! Getting co workers hooked too! We need this fun in our lives right now!

Please keep the show on the air! My dad and I used the original Press Your Luck together. It brings back many pleasant childhood memories!