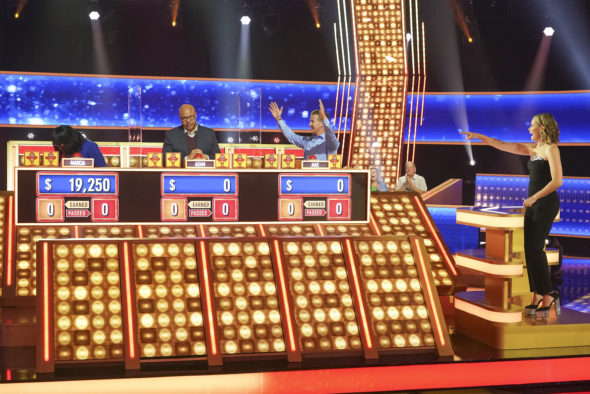 This game show has avoided the dreaded WHAMMY of cancellation. ABC has renewed the Press Your Luck competition series for a fourth season. New episodes will begin airing this summer.

Press Your Luck is a primetime revival of the 1980s daytime game show which ran for three seasons on CBS. Hosted by Elizabeth Banks, this version of the series features contestants squaring off to answer questions in a game of wits, strategy, and high stakes. During each game, three contestants compete against each other by answering questions to earn spins on the Big Board. Contestants then use their spins to win cash and prizes while trying to avoid the WHAMMY, who could take all of their winnings and leave them with nothing. The winning contestant moves on to the bonus round to face the WHAMMY in a final battle for the chance to win a million dollars.

Airing on Wednesday nights last summer, the third season of Press Your Luck averaged a 0.49 rating in the 18-49 demographic and 3.22 million viewers in the live+same day ratings (includes all DVR playback through 3:00 AM). Compared to season two, that’s down by 18% in the demo and down by 16% in viewership.

The third season of 12 episodes aired from May through August of last year. The fourth season kicks off on Thursday, July 7th, paired with a new unscripted series, Generation Gap.

What do you think? Do you like the Press Your Luck game show? Are you glad that this series has been renewed for a fourth season on ABC?

I absolutely LOVE this dumb show!!! Love it! And Elizabeth Banks is the best. ❤️ Love her!!

Absoulutely my favorite game show as, it puts you on the edge of your chair & does the hour zoom by fast!

Love this show and Elizabeth Banks is the best hostess!! Please keep it going!

We love it thank you for keeping it

Love this show and the original! So glad it’s been renewed!

That’s great!! I love this game and Elizabeth Banks

So glad it is coming back. Best show on TV!

so glad its back, i was afraid it was canceled, glad its not <3