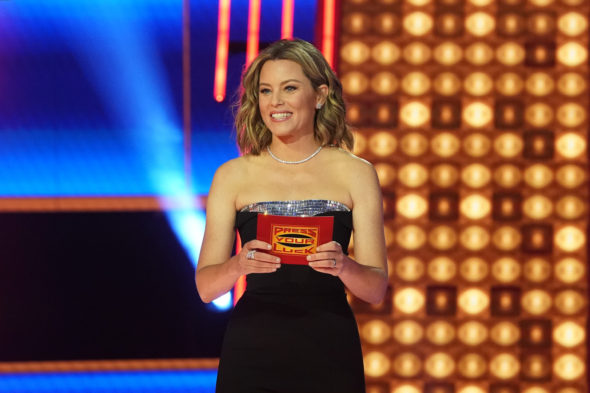 How many players can evade the dreaded WHAMMY? Has the Press Your Luck TV show been cancelled or renewed for a fourth season on ABC? The television vulture is watching all the latest cancellation and renewal news, so this page is the place to track the status of Press Your Luck, season four. Bookmark it, or subscribe for the latest updates. Remember, the television vulture is watching your shows. Are you?

Airing on the ABC television network, Press Your Luck is a primetime revival of the 1980s daytime game show which ran for three seasons on CBS. Hosted by Elizabeth Banks, this version of the series features contestants squaring off to answer questions in a game of wits, strategy, and high stakes. During each game, three contestants compete against each other by answering questions to earn spins on the Big Board. Contestants then use their spins to win cash and prizes while trying to avoid the WHAMMY, who could take all of their winnings and leave them with nothing. The winning contestant moves on to the bonus round to face the WHAMMY in a final battle for the chance to win a million dollars.

The third season of Press Your Luck averaged a 0.49 rating in the 18-49 demographic and 3.22 million viewers in the live+same day ratings (includes all DVR playback through 3:00 AM). Compared to season two, that’s down by 18% in the demo and down by 16% in viewership in the live+same day ratings (including DVR playback through 3:00 AM). While these numbers don’t include further delayed or streaming viewing, they are a very good indicator of how a show is performing, especially when compared to others on the same channel. There can be other economic factors involved in a show’s fate, but typically the higher-rated series are renewed and the lower-rated ones are cancelled. Find out how Press Your Luck stacks up against other ABC TV shows.

Will ABC cancel or renew Press Your Luck for season four? The ratings for this show aren’t great but it’s part of the network’s stable of revived game shows. It’s only in its third season so, I think it will be renewed for at least another year. I’ll update this page with breaking developments. Subscribe for free alerts on Press Your Luck cancellation or renewal news.

4/7/22 update: Press Your Luck has been renewed for a fourth season on ABC.

What do you think? Are you glad that the Press Your Luck TV show has been renewed for a fourth season? How would you feel if ABC had cancelled this TV series, instead?

I think it will. If they cast nationwide they might get better ratings. Not to mention all the other revivals are in their 5th season and PYL is the only one with an extra special new million dollar bonus round.

But I want to see the new contestants including… me! And the new prizes too! And the unaired episodes from season 3!

There’s only one unaired so it should be included next season. Lord knows the 4 from season 2 finally made it ^_^

What are some new prizes that could be added to that game show if there’s a season 4? And I want you to ask the PYL make two new whammies mermaid whammy and Old Macwhammy. Will that be a great idea?

Please do not cancel the show with Elizabeth Banks we love it so much.

Wasn’t there some unaired episodes from season 3?

Is anyone gonna answer me?

Production #309 is the only one unaired at this point.

Idk, I only know of the episode from the TV IV site.

Please do NOT cancel Press Your Luck with Elizabeth Banks and put something else on its place that we don’t want to watch. We love that show!

Yes! I would be very upset if Press Your Luck got cancelled! I enjoy it immensely!!!

I love this show so if they cancel this show i would probably cry!!!

I don’t watch , so no opinion