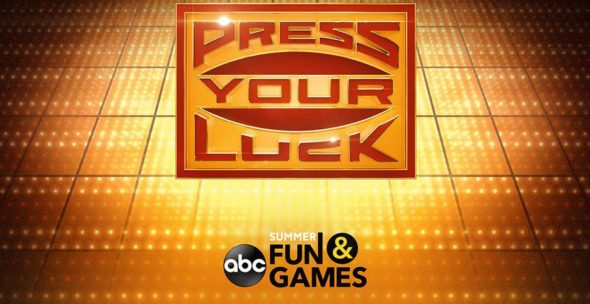 In the last few years, ABC has wagered on its primetime game show lineup in a big way. Now the Alphabet Network has revived the Press Your Luck TV show, which was created by Bill Carruthers and Jan McCormack and ran on CBS from 1983 to 1986 before its cancellation. Will it be a Nielsen ratings winner, or will it get the WHAMMY? Will Press Your Luck be cancelled or renewed for season two? Stay tuned. *Status update below.

An ABC game show from executive producers Jennifer Mullin and John Quinn, Press Your Luck is hosted by Elizabeth Banks. The series features three contestants squaring off to answer questions while trying to avoid getting wiped out by the “WHAMMY,” in a quest to win cash and prizes.

What do you think? Do you like the Press Your Luck TV series? Should this ABC TV game show be cancelled or renewed for a second season?

What happened to the new commercials of Press Your Luck on ABC for Season 3?

We like it, should be renewed for 2nd season.

Please bring back this press your luck game show. I love that new host Elizabeth.

Bring back Press your luck for another season. Elizabeth Banks great hostess, sincere, and bring a lot of enjoyment to the show.

Press your luckwith elizabeth banks should be renewed. Fun show and great hostess. She is fantastic, sincere and brings a lot of enjoyment to the show.

We loved the bring it back

Love Press Your Luck. Please bring it back for a another season.

Please bring press your luck back…me and my partner love it and the show deserves a comeback.