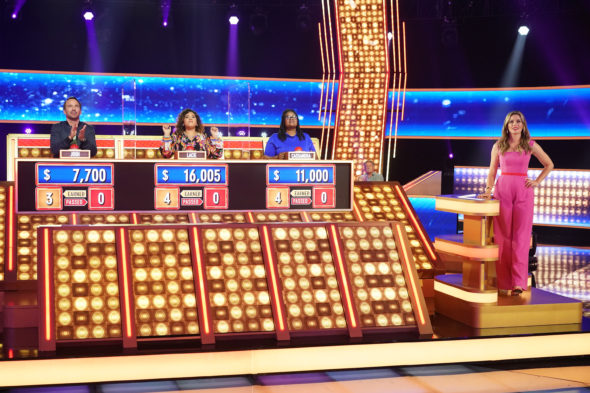 Who will get hit by the WHAMMY in the third season of the Press Your Luck TV show on ABC? As we all know, the Nielsen ratings typically play a big role in determining whether a series like Press Your Luck is cancelled or renewed for season four. Unfortunately, most of us do not live in Nielsen households. Because many viewers feel frustrated when their viewing habits and opinions aren’t considered, we invite you to rate all of the third season episodes of Press Your Luck here.  *Status Update Below.

An ABC game show, Press Your Luck is a primetime revival of the 1980s daytime game show which ran for three seasons on CBS. Hosted by Elizabeth Banks, this version of the series features contestants squaring off to answer questions in a game of wits, strategy, and high stakes. During each game, three contestants compete against each other by answering questions to earn spins on the Big Board. Contestants then use their spins to win cash and prizes while trying to avoid the WHAMMY, who could take all of their winnings and leave them with nothing. The winning contestant moves on to the bonus round to face the WHAMMY in a final battle for the chance to win a million dollars.

What do you think? Which season three episodes of the Press Your Luck TV series do you rate as wonderful, terrible, or somewhere between? Do you think that Press Your Luck should be cancelled or renewed for a fourth season on ABC? Don’t forget to vote, and share your thoughts, below.

*4/7/22 update: Press Your Luck has been renewed for a fourth season on ABC.

We love the whammy