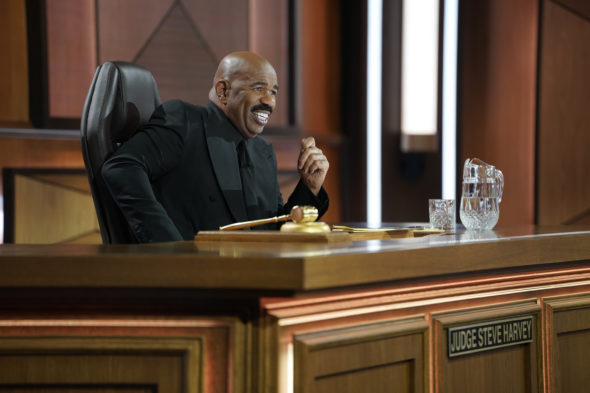 This TV judge is staying on the bench. Judge Steve Harvey has been renewed for a second season on ABC. The first season is currently airing on Tuesday nights.

A comedy court reality series, the Judge Steve Harvey TV show stars stand-up comedian and television show host Steve Harvey. On the show, Harvey serves as both the judge and the jury but, unlike other TV judges, Harvey has never held any judgeship or legal licenses. With the help of Nancy Price, his trusted bailiff by trade, Harvey plays by his own rules, basing his courtroom decisions on his own life experiences and some good old common sense. Real-life people with real-life conflicts present their case in Harvey’s TV courtroom and they range from family disputes, unpaid bets, sour friendships, and everything in between.

What do you think? Have you enjoyed watching Judge Steve Harvey on ABC? Are you glad that this series has been renewed for a second season?

I love some Steve Harvey!!! Didn’t think I was going to like the show but Steve is hilarious and made it great! Especially loved the 2 young men had to eat nasty Herring

This is the stupidest show on TV. So , let’s keep it and get rid of other shows that have been on for years !!
I may just stop watching this channel for awhile, apparently my opinion doesn’t count !!!

I’m so happy to find out that ABC has renewed “Judge Steve Harvey” for a second season.