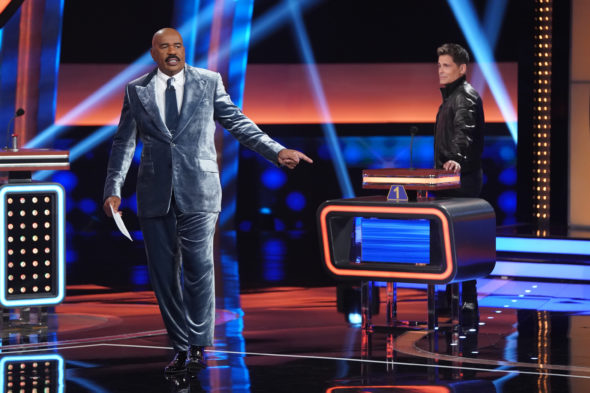 Survey says… this ABC series has been renewed. The alphabet network has picked up Celebrity Family Feud for an eighth season and the series will return on Sunday, July 10th.

A primetime game show, Celebrity Family Feud is hosted by Steve Harvey. Just as in the original Family Feud series, celebrities and their family and friends try to guess the most popular answers to surveys of 100 members of a past studio audience. The difference is, in this version, they’re playing for up to $25,000 for charities. Contestants in season seven include Rob Lowe, Terrence Howard, Zach Braff, Donald Faison, Neil Flynn, Wendi McLendon-Covey, Patrick Warburton, Dee Snider, Terry Bradshaw, JoJo Siwa, Ross Mathews, and Loni Love.

The seventh season of Celebrity Family Feud averaged a 0.63 rating in the 18-49 demographic and 4.66 million viewers. Compared to season six, that’s down by 16% in the demo and down by 10% in viewership in the live+same day ratings (includes DVR playback through 3:00 AM). It was ABC’s highest-rated in the demo for last summer.

Today, the alphabet network also renewed Judge Steve Harvey for a season. The first season finishes airing on April 26th and a premiere date for season two will be announced in the future.

What do you think? Do you enjoy watching the Celebrity Family Feud TV show on ABC? Are you looking forward to season eight?

After the other cancellations earlier in the week, I thought maybe ABC was getting out of the prime-time game show business. Guess they figured that the guy who already has 666 other shows on the air really needed the work??