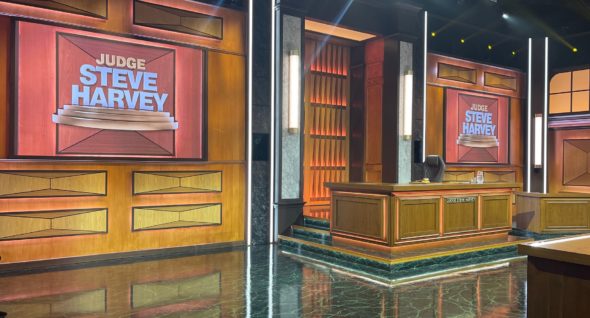 Airing on the ABC television network, the Judge Steve Harvey TV show stars stand-up comedian and television show host Steve Harvey. On the show, Harvey serves as both the judge and the jury but, unlike other TV judges, Harvey has never held any judgeship or legal licenses. With the help of Nancy Price, his trusted bailiff by trade, Harvey plays by his own rules, basing his courtroom decisions on his own life experiences and some good old common sense. Real-life people with real-life conflicts present their case in Harvey’s TV courtroom and they range from family disputes, unpaid bets, sour friendships, and everything in between.

The first season of Judge Steve Harvey averages a 0.68 rating in the 18-49 demographic and 4.58 million viewers in the live+same day ratings (including DVR playback through 3:00 AM). While these numbers don’t include further delayed or streaming viewing, they are a very good indicator of how a show is performing, especially when compared to others on the same channel. There can be other economic factors involved in a show’s fate, but typically the higher-rated series are renewed and the lower-rated ones are cancelled. Find out how Judge Steve Harvey stacks up against other ABC TV shows.

Will ABC cancel or renew Judge Steve Harvey for season two? Harvey’s been very successful in the game show and talk show genres so it’s no surprise that he’s doing well in a comedy courtroom. On top of that, I suspect that the series is relatively inexpensive to produce. I think there’s a good chance that Judge Steve Harvey will be renewed. I’ll update this page with breaking developments. Subscribe for free alerts on Judge Steve Harvey cancellation or renewal news.

What do you think? Do you hope that the Judge Steve Harvey TV show will be renewed for a second season? How would you feel if ABC cancelled this TV series, instead?

I love the show. Time for some humor

I have not seen the show, only the premiere. I support Mr. Harvey and hope for his renewer!!

It did not hold my attention. Let it go!!! I think he can do better.

I think it stinks!