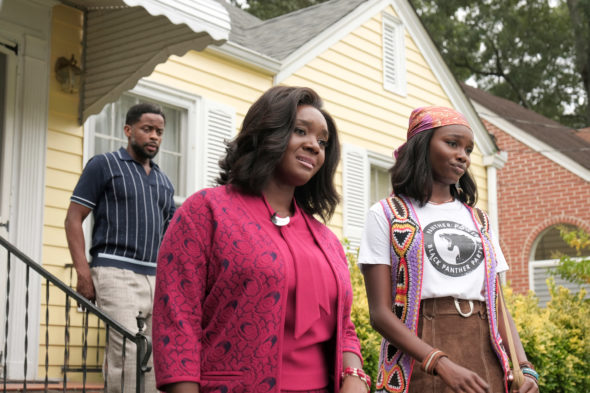 Will this show outlast the original? Has The Wonder Years TV show been cancelled or renewed for a second season on ABC? The television vulture is watching all the latest cancellation and renewal news, so this page is the place to track the status of The Wonder Years, season two. Bookmark it, or subscribe for the latest updates. Remember, the television vulture is watching your shows. Are you?

Airing on the ABC television network, The Wonder Years TV show was inspired by the original 1988 series. This incarnation stars Don Cheadle, Elisha “EJ” Williams, Dule Hill, Saycon Sengbloh, Laura Kariuki, Julian Lerner, Amari O’Neil, and Milan Ray. Set in the late 1960s, the series takes a nostalgic look at the Williams family — Black middle-class residents of Montgomery, Alabama — through the point of view of imaginative 12-year-old son Dean (Williams). Dean narrates the story as an adult (Cheadle). His hopeful and humorous recollections of his past spotlight the ups and downs of growing up in that time and place, as well as the friendship, laughter, and lessons Dean encountered along the way.

The first season of The Wonder Years averaged a 0.42 rating in the 18-49 demographic and 2.36 million viewers in the live+same day ratings (including DVR playback through 3:00 AM). While these numbers don’t include further delayed or streaming viewing, they are a very good indicator of how a show is performing, especially when compared to others on the same channel. There can be other economic factors involved in a show’s fate, but typically the higher-rated series are renewed, and the lower-rated ones are cancelled. Find out how The Wonder Years stacks up against other ABC TV shows.

Will ABC cancel or renew The Wonder Years for season two? The original series had a healthy run three decades ago on the same network. While some viewers say they don’t care for reboots, a familiar title can help entice viewers to at least give a new show a try. It premiered well and, so far, I think this family comedy has a very good chance of being renewed. Interestingly, this version of Wonder Years precedes The Conners on the ABC schedule, just as the original Wonder Years preceded Roseanne in 1988. I’ll update this page with breaking developments. Subscribe for free alerts on The Wonder Years cancellation or renewal news.

What do you think? Are you glad that The Wonder Years TV show has been renewed for a second season? How would you feel if ABC cancelled this TV series instead?

I Wonder why this show hasn’t been canceled yet?

Loved the original and this one as well.good family time.

Please renew this for a second season! I loved watching the original Wonder Years growing up but even in my youth, I knew that my experiences as a person of color, would be different from the original cast if I was living in 1960s America. In this series, I saw a lot of familiarities and values that reminded me of my own family… On the same token, it still shows us the commonality in the transition from being a child to being an adult just as the first Wonder Years did, it’s something we all know and is relatable, even… Read more »

Please renew the show! It is soooo good!

I hope this wonderful shows is renewed

Cancel brings too much division.