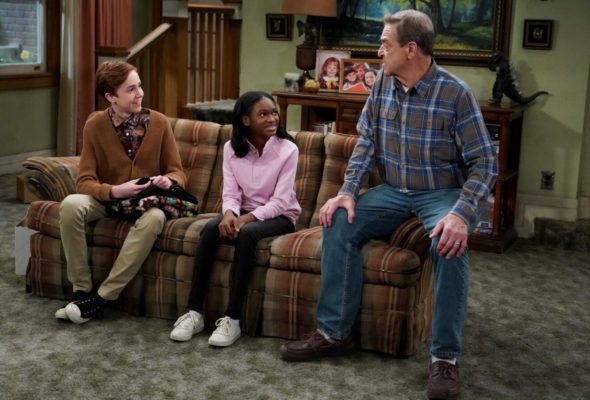 Members of the family may be moving out but they still stick together. Has The Conners TV show been cancelled or renewed for a sixth season on ABC? The television vulture is watching all the latest cancellation and renewal news, so this page is the place to track the status of The Conners, season six. Bookmark it, or subscribe for the latest updates. Remember, the television vulture is watching your shows. Are you?

Airing on the ABC television network, The Conners TV show stars John Goodman, Laurie Metcalf, Sara Gilbert, Lecy Goranson, Emma Kenney, Ames McNamara, Jayden Rey, and Jay R. Ferguson. Katey Sagal and Nat Faxon recur. Picking up where the revival of the Roseanne sitcom left off, this series follows the extended working-class Conner family that’s led by widower Dan Conner (Goodman) and his three adult children — Becky (Goranson), Darlene (Gilbert), and D.J. (Michael Fishman) — as well as sister-in-law, Jackie Harris (Metcalf). Season five picks up after the double wedding of Jackie and Neville (Faxon) and Darlene and Ben (Ferguson). Meanwhile, D.J. has left to join his wife overseas but his daughter Mary (Rey) stays in Lanford. Members of the Conner family continue to grapple with parenthood, dating, financial pressures, and aging in working-class America. Through it all, with love, humor, and perseverance, the family prevails.

The fifth season of The Conners averages a 0.52 rating in the 18-49 demographic and 3.60 million viewers. Compared to season four, that’s up by 4% in the demo and up by 14% in viewership in the live+same day ratings (including DVR playback through 3:00 AM). While these numbers don’t include further delayed or streaming viewing, they are a very good indicator of how a show is performing, especially when compared to others on the same channel. There can be other economic factors involved in a show’s fate, but typically the higher-rated series are renewed and the lower-rated ones are cancelled. Find out how The Conners stacks up against other ABC TV shows.

Will ABC cancel or renew The Conners for season six? This series continues to be one of the network’s highest-rated comedies. As long as the stars want to continue, I have no doubt that The Conners will be renewed. I’ll update this page with breaking developments. Subscribe for free alerts on The Conners cancellation or renewal news.

What do you think? Do you hope that The Conners TV show will be renewed for a sixth season? How would you feel if ABC cancelled this TV series, instead?