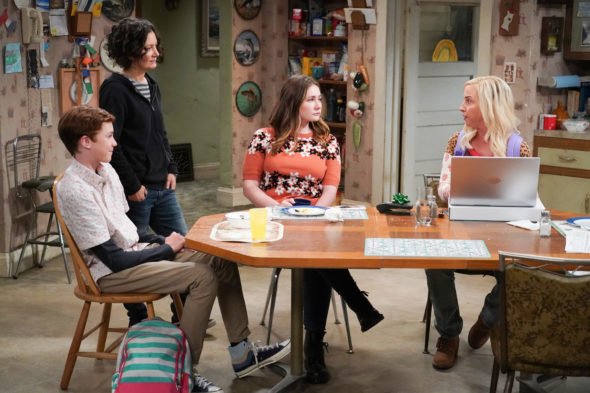 Will the family catch a break in the fourth season of The Conners TV show on ABC? As we all know, the Nielsen ratings typically play a big role in determining whether a TV show like The Conners is cancelled or renewed for season five. Unfortunately, most of us do not live in Nielsen households. Because many viewers feel frustrated when their viewing habits and opinions aren’t considered, we invite you to rate all of the fourth season episodes of The Conners here. Status Update Below.

What do you think? Which season four episodes of The Conners TV series do you rate as wonderful, terrible, or somewhere between? Do you think that The Conners should be cancelled or renewed for a fifth season on ABC? Don’t forget to vote, and share your thoughts, below.

Love this show…so much better without Rosanne.

I like this show. It is better without Rosanne bossing every one around.

This is my “ go to” show – it is my all time favorite tv show – i can always relate to it and the characters are so real . Definitely renew this show .

I love this show talks about real life problems.i think it needs to continue and I hope for season 5.its a good clean show no bad language

Can’t agree with you more

I love it ! It’s about time a show talks about god. 2 thumbs up

I NEVER WATCH THIS SHOW .

Put this show out of its misery. It was bad with Roseanne and it’s bad without her. There are a lot better shows on TV than this one.

Agreed. Having just watched the first 2 episodes of season 4 it definitely feels as though this show is running on empty. No season 5 please .