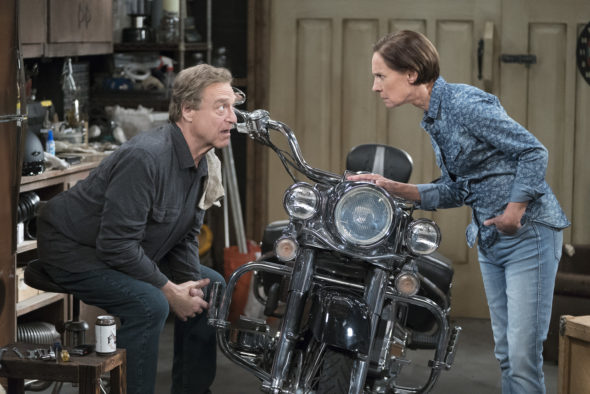 Are you enjoying the first season of The Conners TV show on ABC — even without Roseanne Barr? As we all know, the Nielsen ratings typically play a big role in determining whether a TV show like The Conners is cancelled or renewed for season two. Unfortunately, most of us do not live in Nielsen households. Because many viewers feel frustration when their viewing habits and opinions aren’t considered, we’d like to offer you the chance to rate all of The Conners season one episodes here. *Status update below.

An ABC sitcom, The Conners stars John Goodman, Laurie Metcalf, Sara Gilbert, Lecy Goranson, Michael Fishman, Emma Kenney, Ames McNamara, Jayden Rey, and Maya Lynne Robinson. Guest stars in season one include Estelle Parsons, James Pickens Jr., Natalie West, Johnny Galecki, and Juliette Lewis. A spin-off of the cancelled TV series Roseanne, the sitcom follows the working-class family of Roseanne and Dan Conner (Goodman) including their three children Becky (Goranson), Darlene (Gilbert), and D.J. (Fishman), as well as Roseanne’s sister, Jackie Harris (Metcalf). No matter what challenges they meet in Lanford, Illinois (including the loss of matriarch Roseanne), the Conners endure thanks to their persistence, humor, and most of all — love.

What do you think? Which season one episodes of The Conners TV series do you rate as wonderful, terrible, or somewhere between? Should ABC cancel or renew The Conners for a second season? Don’t forget to vote, and share your thoughts, below.

I think the fake audiance laugh is annoying! And overdone! Not funny in any way!